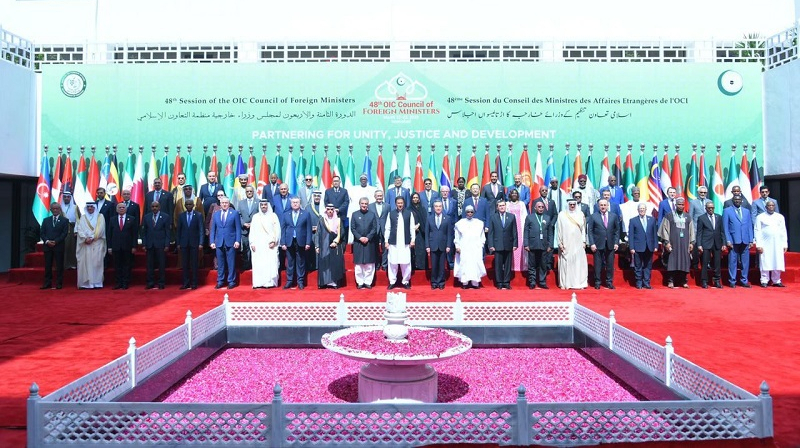 On March 22-23, Islamabad hosted the 48th session of the Council of Foreign Ministers of the Organization of Islamic Cooperation (OIC) on the topic “Building a partnership for unity, justice and development.”

The session discussed a wide range of issues related to the Islamic world, including the activities of the OIC General Secretariat in the implementation of resolutions on Palestine and Jerusalem, as well as the security situation in the period after the OIC Council of Foreign Ministers in Niamey in 2020, the Foreign Ministry of Azerbaijan told News.Az.

Other political issues were also discussed at the session, in particular the events in Afghanistan and their humanitarian consequences for the Afghan people, the situation in Jammu and Kashmir.

Azerbaijan was represented at the event by a delegation led by Deputy Foreign Minister Elnur Mammadov. Speaking at the meeting, the deputy minister brought to the attention of the participants the position of Azerbaijan on a number of fundamental issues.

These resolutions, traditionally adopted annually by the OIC, include new provisions, taking into account the latest situation in the region.

The resolution "Liquidation of the Consequences of the Aggression of the Republic of Armenia against the Republic of Azerbaijan" welcomes the trilateral statement of November 10, 2020 on the liberation of the occupied territories of Azerbaijan and the cessation of hostilities. There was made a call for the normalization of relations between Armenia and Azerbaijan on the basis of mutual recognition and respect for sovereignty, territorial integrity and international borders. Armenia's continued refusal to provide comprehensive and accurate maps of all mined areas and other information on the location of mined areas also was condemned. Full solidarity and support for the efforts of the government and people of Azerbaijan to protect their country and overcome the grave consequences of decades of Armenian aggression and occupation were reaffirmed.

The resolution "Destruction and insult of Islamic historical and cultural shrines in the territory of Azerbaijan as a result of the aggression of the Republic of Armenia against the Republic of Azerbaijan" strongly condemns the destruction, looting, theft, illegal transfer or appropriation of Islamic historical and cultural monuments and shrines in the territories of Azerbaijan during the period of occupation, and also acts of vandalism against these objects, Armenia's insult to mosques located in the newly liberated territories. The resolution confirms the right of Azerbaijan to demand compensation for the damage caused to it and the obligation of Armenia to pay this compensation.

The resolution "Economic Assistance to the Republic of Azerbaijan" states that the liberation of Azerbaijani territories will allow more than one million internally displaced persons in Azerbaijan to safely return to their native lands and, thus, eliminate serious humanitarian problems. In this regard, Member States, the Islamic Development Bank and other Islamic institutions are called upon to assist the government and people of Azerbaijan in the reconstruction and restoration of the liberated lands in order to ensure their return to these territories. There was also made an appeal to all international institutions to support the economic and social development of Azerbaijan.

The resolution "Solidarity with the victims of the Khojaly Massacre", adopted at the 48th meeting of the Council of Foreign Ministers of the OIC, strongly condemns the mass atrocities committed by the armed forces of Armenia against the Azerbaijani civilian population and military personnel in February 1992 in Khojaly and other then occupied territories of Azerbaijan. Member States are called upon to make the necessary efforts to locally and internationally recognize the crimes committed during the conflict in Khojaly and other occupied territories of Azerbaijan, such as war crimes, crimes against humanity and genocide. The resolution also praised the activities of the international campaign "Justice for Khojaly" and called on member states to support the campaign and actively participate in it.