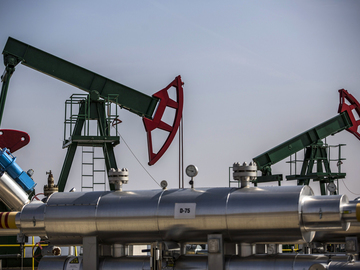 Oil markets dipped on Friday, pulled down by high fuel inventories and improving industry efficiency, but were still on track for a solid weekly gain.

Crude prices are around levels in late November last year, when a group of oil producers including Russia and Organization of the Petroleum Exporting Countries (OPEC) pledged to withhold around 1.8 million barrels per day (bpd) of output between January this year and March 2018 to tighten the market.

"OPEC compliance with production cuts slipped to 98 percent in June, but more importantly output from exempt (from cutting)members Libya and Nigeria is currently about 700,000 bpd higher than at the time of the November OPEC agreement, offsetting about 60 percent of the OPEC cuts. The growth in U.S. production over the same time negates the remainder," U.S. investment bank Jefferies said.

U.S. oil production C-OUT-T-EIA has risen by more than 10 percent over the past year to 9.4 million bpd.

"For the first half of 2017, OECD inventories are likely to finish higher, rather than lower ... The most plausible explanation is that OPEC compliance has been not as high as has been suggested," Bernstein said.

"OPEC will have to cut deeper and for longer if it wants to eliminate the inventory overhang and prices to rise," Bernstein said.

It added that the upside for oil prices looked limited even if OPEC took more action due to high U.S. shale production.