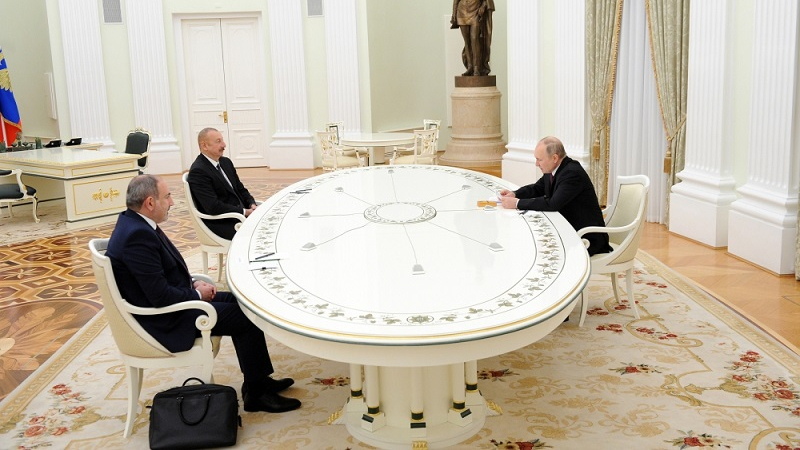 Commonspace.eu portal has published an article entitled “One year after the end of the 44 day Karabakh War there is hope for a more peaceful year ahead.”

A year passed since Armenia and Azerbaijan signed the Russia-mediated trilateral statement on November 10, 2020, putting an end to the six-week war over Nagorno-Karabakh and surrounding regions of Azerbaijan. The relations between the two countries and situation in the region over the last year can be briefly characterized as generally stable despite periodic escalations. The statements of the leaders from both sides along with some major developments promise a more peaceful year ahead.

Armenia – Azerbaijan relations in the post-war period were conducted on the basis of the trilateral statement of November 10. In this sense, the 9-article statement was more than a ceasefire deal and served as the framework agreement for further Armenia – Azerbaijan negotiations. While some provisions of the deal were immediately, though partially, implemented, some have not been implemented yet and have been the main subject  of the negotiations held since. In accordance with the statement, Kalbajar, Agdam and Lachin were returned to Azerbaijan by December 1, 2020, Russia’s peacekeeping mission was immediately deployed to the region, and a Russian-Turkish ceasefire monitoring center was opened. The 4th and 6th articles of the statement were not fully implemented since Russia failed to ensure the withdrawal of the Armenian armed forces from Karabakh and a plan for the construction of a new route along the Lachin corridor has not been announced yet.

The occasional deadly clashes between the Armenian armed forces and the Azerbaijani side in the Karabakh region demonstrated that peace and security in the region will be in jeopardy as long as the Armenian troops remain in the territories of Azerbaijan.  July 2021 was arguably the most unstable month between the two parties since the end of the latest war, as the sides clashed in Agdam and Shusha cities of Azerbaijan’s Karabakh region as well as along the state borders in the direction of Nakhchivan exclave of Azerbaijan. Armenian Prime Minister Nikol Pashinyan has recently revealed that Armenia had nearly 28 casualties since the end of the 44 Day War. Although Azerbaijan has not revealed statistics yet, its casualties are likely   at a comparable level.

The 7th article of the trilateral statement has not been fulfilled either. This article envisaged the return of the IDPs and refugees to the territory of Nagorno-Karabakh and adjacent districts under the control of the United Nations High Commissioner for Refugees. The return of the Azerbaijani IDPs to the liberated territories is delayed as the region had been massively mined and the entire infrastructure was destroyed by Armenians before the war. Armenia thus far handed landmine maps of three regions which Yerevan initially denied it possessed, and those maps are only 25 percent accurate. Around 150 Azerbaijani citizens were killed by landmines. Azerbaijan allocated 1.3 billion dollars in 2021 for the reconstruction of the liberated territories and the same amount is planned to be spent next year. Azerbaijan will have to spend billions more on the rehabilitation of the region.

The sides are holding intensive negotiations about the unblocking of regional transportation links in accordance with article 9 of the trilateral statement, and seem close to reaching an agreement soon on a number of issues. The Armenia-Azerbaijan-Russia international commission established at the trilateral meeting of the leaders of three countries on January 12 in Moscow has met more than 8 times since then.

Baku and Yerevan were long in dispute about the provision of a railway and highway passage between the western parts of Azerbaijan and its Nakhchivan exclave through the Syunik province of Armenia. On October 15, Armenian Prime Minister Nikol Pashinyan, in an online summit of the Commonwealth of Independent States (CIS), declared his country’s readiness to provide both railway and highway connection to Azerbaijan, via southern Armenian territories. Baku has routinely referred to this overland passage as the “Zangezur corridor,” with a reference to the historical name of what is Syunik. Although Armenia consistently rejected the term “corridor” throughout the past year, but eventually seems to have tacitly agreed to what Azerbaijan meant under this name – “unobstructed movement of persons, vehicles and cargo in both directions”, according to the language of the Trilateral statement.

Article 8 of the declaration, related to the exchange of detainees has been a major bone of contention. Azerbaijan declares that all the Armenians detained during the war have been returned, and those who were detained after the war are not prisoners of wars. On August 30, Russia’s Foreign Minister Sergei Lavrov, supporting Azerbaijan’s position, stated that the status of those who were detained after the war is not covered by the trilateral statement of November 10, 2020 (though he called for the release of all detained). Armenia rejects these arguments and insists that those detainees are prisoners of war and should be returned. Meanwhile, as of November 2021, 113 Armenians thus detained by Azerbaijan have been returned to    Armenia.

The Armenia – Azerbaijan peace negotiations over the past year since the end of the war were also focused on three more issues not covered by the trilateral statement. First, the two countries started to discuss the delimitation and demarcation of the state borders in accordance with Soviet-era maps. Russia proposed to provide consultation or mediation in the negotiations over this issue and stressed that this process should be dealt with separately from the negotiations over Karabakh. The border disputes gained more momentum since mid-May when Armenia was alarmed when Azerbaijani troops advanced as part of the process of fixing the interstate borders with Armenia. Baku reminds that some Azerbaijani settlements such in Qazakh regions remain under Armenian occupation since the First Karabakh War. As the importance of delimitation and demarcation of borders is acknowledged by both Baku and Yerevan, progress in the upcoming months in this direction is anticipated.

Second, the sides have started talking about the signing of a peace agreement putting an end to hostilities and pave the way for more stable and peaceful future. Particularly, the Azerbaijani government repeatedly called upon Armenia to sign such an agreement, although Yerevan has not reacted officially to these calls yet. For Baku, this agreement should primarily include the recognition of each other’s territorial integrity and internationally recognized borders.

Third, as proposed by the leaders of Azerbaijan and Turkey, the countries of the region discuss the establishment of a regional cooperation platform in the 3+3 format (Armenia, Azerbaijan, Georgia + Russia, Turkey, Iran). While all the countries declared some interest in this project, only Georgia refused to participate due to its conflict with Russia. Instead, Tbilisi proposed an alternative format called “Peaceful Neighborhood Initiative”. Neither Armenia nor Azerbaijan has commented yet on Georgia’s initiative.

Meanwhile, it is expected that the leaders of Armenia and Azerbaijan will meet soon with the mediation of the Russian side. According to the media reports, the sides may sign agreements on both delimitation and demarcation of borders and unblocking of regional transportation channels. Although a peace treaty putting an end to all controversial issues between Baku and Yerevan does not seem to be possible in the near future, a more comprehensive agreement resolving the border disputes and transportation issues looks real. Such an agreement would make the upcoming second year after the 44 Day War more peaceful and stable. The region is, however, threatened by persistent tensions and casualties if Russia cannot ensure the withdrawal of the Armenian Armed Forces from the Karabakh region of Azerbaijan and Baku’s calls for a peace treaty are not reciprocated by Yerevan.