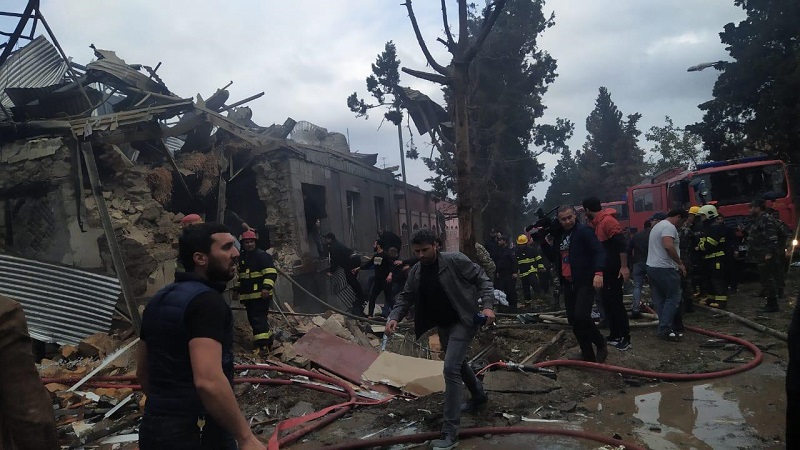 One year has passed since the first missile attack by the Armenian Armed Forces on Azerbaijan’s Ganja city during the Second Karabakh War.

On October 4, 2020, at around 10 a.m. (GMT+4), rockets fired by Armenians hit a civilian settlement in the second largest city of Azerbaijan, including a two-storey building, as well as private houses.

As a result of the enemy’s bombing of Ganja, one civilian - Tunar Aliyev was killed and 32 civilians were injured. Along with houses, civil infrastructure and ancient historical buildings were damaged.

This missile attack by Armenia was the first serious attack outside the war-torn Karabakh region.

After the incident, Azerbaijani Prosecutor General Kamran Aliyev issued a statement. The statement said that the preliminary investigation had gathered enough evidence that the so-called "head" of the illegal entity in Karabakh Arayik Harutyunyan directly violated the requirements of the Geneva Convention and committed acts of deliberate killing of civilians and creating panic among the people.

During the Second Karabakh War, the Armenian Armed Forces attacked Ganja five times (on October 4, 5, 8, 11, 17) with rockets and heavy artillery. As a result, 26 people were killed, 175 were injured, civilian infrastructure and vehicles in the city were severely damaged.

A total of 93 civilians, including 12 children and 27 women, were killed, 454 civilians were injured, 12,292 residential and non-residential areas, 288 vehicles were damaged and facts of damage to 1,018 farms were revealed during the Second Karabakh War.