President Aliyev: Azerbaijan will always be close to Turkiye in all matters 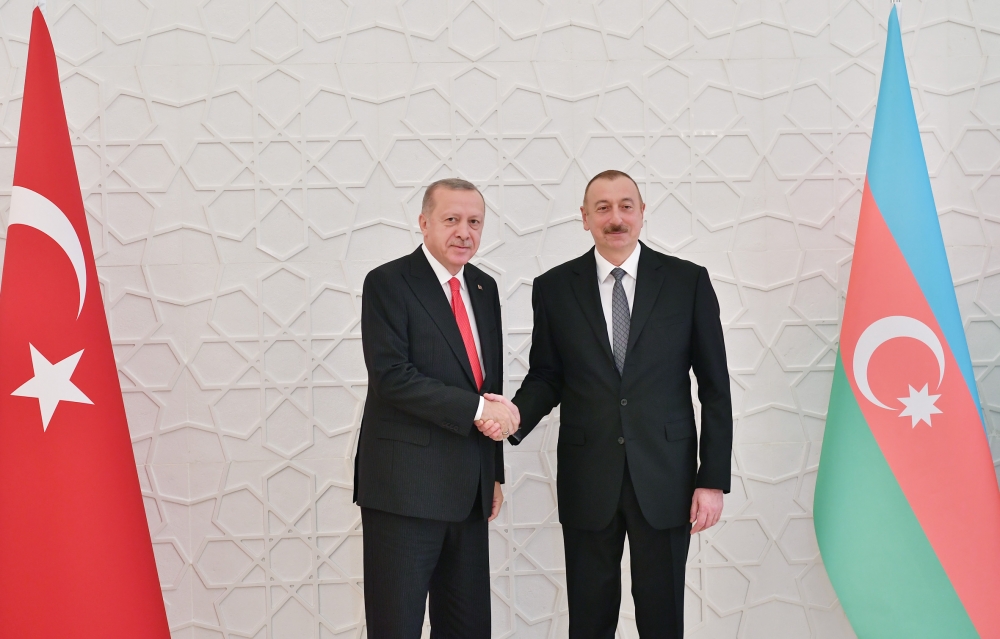 Azerbaijan will always and in all matters continue to be close to fraternal Turkiye, President Aliyev said in a congratulatory letter addressed to his Turkish counterpart Recep Tayyip Erdogan on the occasion of 30th anniversary of diplomatic ties between the two countries.

“I cordially congratulate you and the fraternal Turkish people on the occasion of the 30th anniversary of the establishment of diplomatic relations between the Republic of Azerbaijan and the Republic of Turkiye, and convey my most sincere wishes,” the head of state said.

President Aliyev noted that the establishment of diplomatic relations with fraternal Turkiye on 14 January 1992 was a significant event in the history of the Republic of Azerbaijan.

“Turkiye was the first to recognize Azerbaijan, which gained independence for the second time in the 20th century, and to establish diplomatic relations with it, which is forever inscribed in the national memory of our people as an example of true brotherhood and solidarity,” he said.

“I want to note with a sense of great pride that over the past period, Azerbaijani-Turkish relations have gone through a magnificent path of development. Coming out of historical trials with dignity and head held high, our countries have reaffirmed and maintained their adherence to the spirit of the “One nation, two states” slogan,” the president said.

He emphasized that Azerbaijan-Turkey interstate relations, built on such a solid foundation as the unity, brotherhood and friendship of the two peoples passing from one century to another, are at the highest level today.

“We are pleased with both the mutually beneficial cooperation of our fraternal countries in the political, economic, trade, cultural, energy, military, technological and other fields, and with the successful interaction within the framework of international institutions. The gigantic energy, transport and infrastructure projects we have implemented are a real triumph of our common initiatives and joint efforts. The incomparable successes we have achieved on the basis of bilateral cooperation contribute to the progress of our countries, the well-being of the two peoples, and the establishment of tranquility and stability in our region.”

President Aliyev stressed that the signing in June last year of the Declaration on Allied Relations in the city of Shusha, which is the ancient cultural center of the entire Turkic world, was a historically important step once again confirming the two countries’ indestructible unity.

“By defining the conceptual directions for the development of Azerbaijani-Turkish relations, this document laid the foundation for a new stage, opening the way for our future joint success,” he said.

“You have made an invaluable contribution to the development and strengthening of Azerbaijani-Turkish relations, an alliance that serves as an excellent example of friendship and brotherhood and has no analogue in the world. The resolute and unambiguous position that you have always demonstrated on the issue of the territorial integrity of Azerbaijan and the confident support that you have provided for our just cause have always inspired us and given us additional strength. The Azerbaijani people will never forget the moral support and solidarity demonstrated personally by you, the Republic of Turkiye and your brotherly people from the first hours to the last minutes of the 44-day Patriotic War. And today, shoulder to shoulder with Turkiye, we are moving forward in the major reconstruction and restoration of the lands liberated from occupation, which causes deep satisfaction. We, in our turn, will always and in all matters continue to be close to fraternal Turkiye,” he added.

President Aliyev said he is confident that the exemplary Azerbaijani-Turkish unity and brotherhood, which are the reality and the source of pride for our peoples today, will continue to serve as a strategic roadmap for future generations, as an eternal and indestructible heritage.

“Once again, I cordially congratulate you on this remarkable and historic anniversary, wish you the best of health, success in your endeavors, and the brotherly people of Turkiye lasting peace and prosperity,” the Azerbaijani leader concluded.