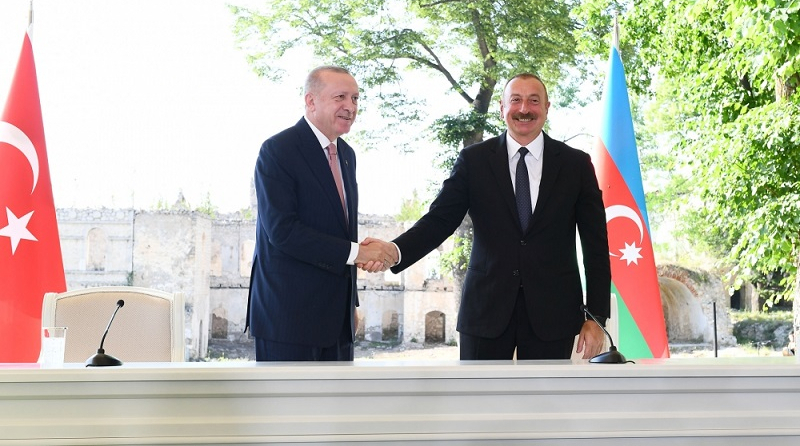 Turkish-Azerbaijani unity and brotherhood are eternal, President of the Republic of Azerbaijan Ilham Aliyev said in a press statement following the ceremony of signing Shusha Declaration.

“A new era begins now. I met my dear brother in Fuzuli city today, met him there and showed him the ruined landscape of Fuzuli. There is no Fuzuli city. You have also been there and seen that there is not a single safe building. The hated enemy has destroyed all our buildings. Aghdam is in a similar situation. Our historical monuments have been destroyed, demolished and looted."

"Notice what state the city of Shusha is in. Shusha is a historic city and not a single building has been built here in the 28 years of occupation. I showed this building to my dear brother. The building of Shusha governor's office was built during the time of my late father. The buildings in Shusha were built both during his time and during the reign of Panahali Khan and Ibrahimkhalil Khan. The loathsome enemy did not leave a single stone unturned. You can see the ruined places of Shusha. In fact, we have slightly refurbished some places here. When I first came here earlier this year, the city was completely devastated," President Aliyev said.

The head of state stressed that Shusha is a historical city of Azerbaijan because Panahali Khan laid the foundation of this city in 1752 and after that 98 percent of the population of Shusha were Azerbaijanis. "Despite the 30 years of occupation, Shusha did not bend, was able to preserve its national spirit, dignity, and was waiting for us. And we came and liberated Shusha."

"Today, the President of the brotherly country is our guest in the historic city, and it is impossible to express the feelings we have. I am sure that everyone who comes here feels the same, and we are grateful to the Almighty God for giving us the opportunity to experience these very emotional days," he said.

"My dear brother, we were looking forward to seeing you in Shusha. I invited you. In December last year, we, the Presidents of the two countries, agreed to hold our next military meeting here, and this is what happened. Welcome again, welcome to your homeland, welcome to Shusha!", the Azerbaijani president added.