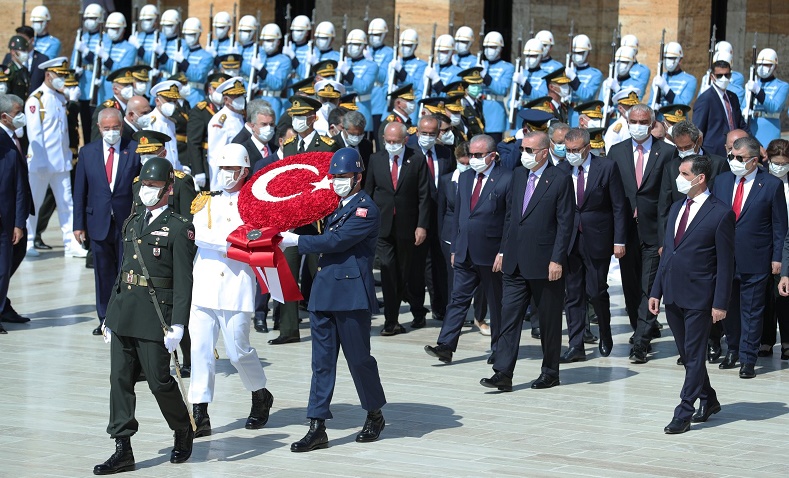 President Recep Tayyip Erdoğan commemorated Turkey's Victory Day on the 99th anniversary of the resounding defeat of occupying Greek armies at the hands of Turks in the Battle of Dumlupınar in 1922, Daily Sabah reports.

"We are in the bliss of achieving the 99th anniversary of the Great Victory, one of the cornerstones of our centuries-old glorious history. I mark the honor of the August 30 Victory Day of our nation, Turkish Cypriots and our citizens living in various countries around the world," Erdoğan said in a written message.

Erdoğan also commemorated Mustafa Kemal Atatürk, the venerated veteran and commander-in-chief of Turkey's War of Independence and founder of the Turkish republic, as well as esteemed members of Turkey's Parliament and the heroic soldiers.

He stressed that Aug. 30 is one of the most critical turning points in the country's history and paved the way for the foundation of the Turkish republic.

"Despite all kinds of poverty and impossibility, the Turkish people have once again shown that these lands, which were made our home with the Battle of Malazgirt (Manzikert) in 1071, are our eternal homeland," he said.

Turkish control of Anatolia – the vast territory of modern Turkey – began with the Aug. 26, 1071 Battle of Manzikert, which saw the Seljuk Turks led by Sultan Alparslan defeat a much larger Byzantine army.

"The spirit, belief and will that inspired the Great Victory are drawing the direction for our nation today, just as it did 99 years ago," Erdoğan added.

He said Turkey has become the hope of not only its 84 million citizens living within its borders but also hundreds of millions from the Balkans to Asia, from Africa to Europe.

Turkey will continue to defend the rights of the oppressed against the oppressors and to strive for peace, justice and freedom to prevail all over the world, he added.