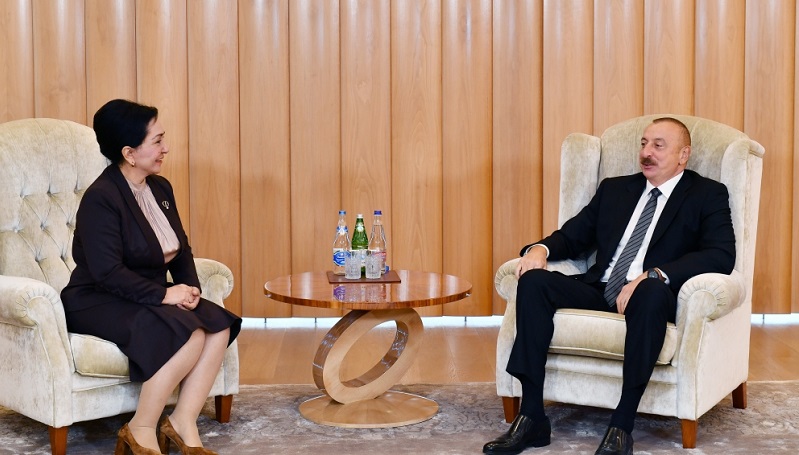 President of the Republic of Azerbaijan Ilham Aliyev has received Chairperson of the Senate of the Oliy Majlis of Uzbekistan Tanzila Norbaeva.

The President of Azerbaijan thanked for Shavkat Mirziyoyev’s greetings and asked the Senate Chairperson to convey his greetings to the Uzbek President.

President Ilham Aliyev emphasized that he was very satisfied with the results of the state visit to Uzbekistan, expressed his gratitude for the high level of hospitality shown, and noted that the visit was very meaningful. As agreed during the visit, tasks were given to relevant state institutions, and these issues will be regularly monitored to facilitate the implementation of the agreements reached. The head of state said that the visit had once again demonstrated the strength of friendship and fraternal ties between the two countries.

Pointing out the importance of the conference of the Non-Aligned Movement Parliamentary Network being held in Baku, President Ilham Aliyev emphasized the significance of cooperation within the framework of the Non-Aligned Movement, which is the second largest organization after the UN, and noted that Azerbaijan was currently implementing a number of initiatives in the direction of institutionalization of the Movement.

Tanzila Norbaeva stressed that President Ilham Aliyev's state visit to Uzbekistan had left a deep impression on President Shavkat Mirziyoyev and the people of Uzbekistan. As a result of the visit, instructions were given to relevant institutions by the leadership of Uzbekistan.

Remembering national leader of the Azerbaijani people Heydar Aliyev with great reverence, Tanzila Norbaeva noted that the great leader had made a great contribution to the development of friendly relations between Uzbekistan and Azerbaijan, adding that President Ilham Aliyev was successfully continuing his policy.

Noting that Azerbaijan's territorial integrity had been restored, the chairperson of the Senate of Uzbekistan emphasized that the delegation would travel to Shusha as part of the visit to the country. The Senate chairperson noted that Azerbaijan had become a global venue for political, economic and humanitarian events.

Tanzila Norbaeva said that the Baku Conference of the Non-Aligned Movement Parliamentary Network had been held successfully and expressed her gratitude for the invitation. She emphasized that President Ilham Aliyev was the author of the initiative to hold this event in Azerbaijan, praising Azerbaijan’s effective chairmanship in the Movement.

During the conversation, the sides stressed the importance of inter-parliamentary relations between the two countries. It was emphasized that the parliaments of the two countries would support the process of implementation of the agreements reached by the heads of state.

The Uzbek Senate chairperson said that she was witnessing extensive development in Baku every time she visited Azerbaijan.