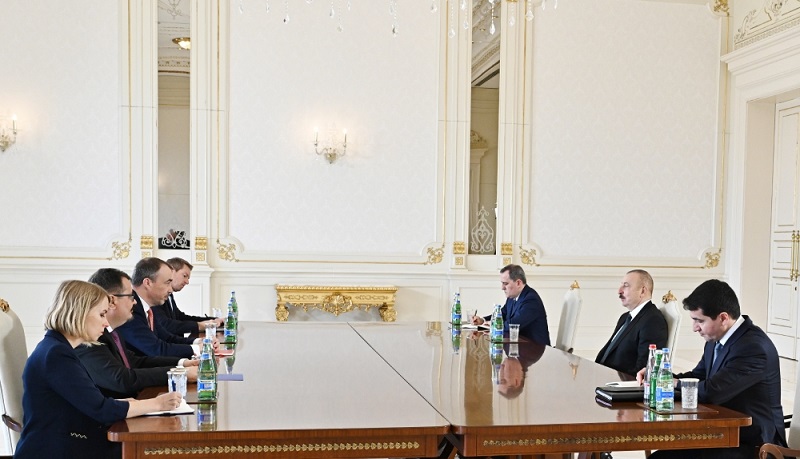 President of the Republic of Azerbaijan Ilham Aliyev has received a delegation led by European Union Special Representative for the South Caucasus and the crisis in Georgia Toivo Klaar, News.az reports.

- I am very delighted to see you again. I am pleased that you are visiting us after our meeting in Brussels. It has been two weeks since the trilateral meeting, which was very constructive and produced good results and achievements. I would like to thank President Charles Michel for his efforts and for creating an atmosphere that has allowed us the opportunity to discuss very important issues and agree on the beginning of the normalization process. I think that it was the starting point because we have agreed to establish border commissions and, at the same time, working groups on a peace agreement. We have talked about this before, and as you know, after the second Karabakh war, Azerbaijan's position has always been that we should start negotiations around a peace agreement. I think the official starting point was in Brussels on 6 April. Since then, we have been working, the Ministry of Foreign Affairs has been working, and my administration has been in contact with your team, so we are ready to start, as we agreed. I think it is important that we continue this progress and that both sides adhere to the agreements reached.

One of the issues that needs to be clarified with the Armenian side is the issue of communications with Azerbaijan and the Nakhchivan Autonomous Republic. I mean both railway and highway. As for the railway, I informed President Michel that we have built more than 60 kilometers of the railway in Azerbaijan and will complete the construction next year. Unfortunately, they have not yet started working on the feasibility study in Armenia, which indicates that the process can be delayed.

As for the highway, Azerbaijan is actively building it, and most of the road has already been built. We also hope that the highway will reach the Armenian border by the end of next year. Unfortunately, the Armenian prime minister did not specify the geographical coordinates during the meeting in Brussels. I raised this issue in a video conference on 4 February, but there was no answer. On 6 April, I asked for the geographical coordinates of the road again, but there was still no answer. I do hope we will get it soon.

In general though, I consider the results of the meeting in Brussels positive. I announced this to the public on 12 April. The next day, the Armenian prime minister also spoke openly about the normalization process and Armenia's acceptance of the five principles put forward by Azerbaijan. This indeed is a turning point in the process. I think these are positive comments. Now, after this official statement from both sides, we must prove our seriousness on the table. Here we have high hopes for the efforts of the European Union, especially President Charles Michel, who is already heavily involved in the process. He is already quite familiar with the process. I think this creates a very promising environment for successful negotiations. So we will discuss this in more detail today. I just wanted to express our official position on the events in Brussels and the events that took place after 6 April.

-Thank you, Mr. President. President Michel also conveys his best wishes to you. As you mentioned, he is very committed to the process and supporting it. His opinion, and indeed ours, is that the meeting in Brussels was very successful. As you mentioned, we must work to ensure the implementation and continuation of the agreed issues. That is the purpose of my visit. I will be here today to hear what you view as the next steps and to learn what we as the European Union can do to support the normalization process, to work towards a comprehensive settlement, and I will go to Yerevan in the second half of the week.

President of the Republic of Azerbaijan Ilham Aliyev has received a delegation led by European Union Special Representative for the South Caucasus and the crisis in Georgia Toivo Klaar.