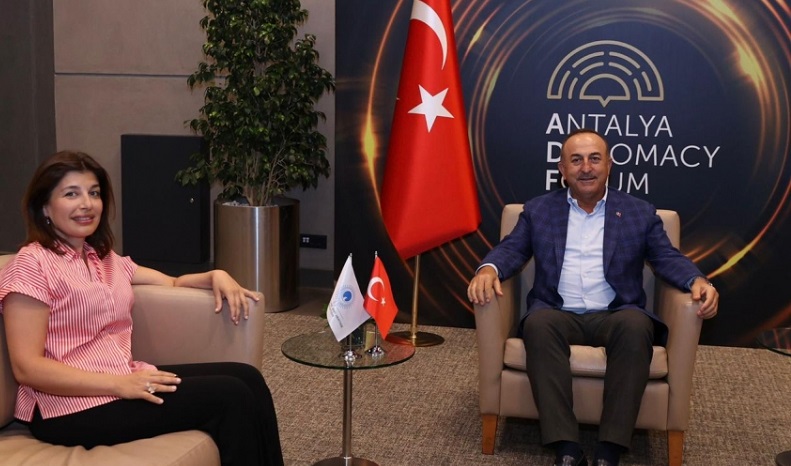 President of the International Turkic Culture and Heritage Foundation Gunay Afandiyeva and Minister of Foreign Affairs of Turkey Mevlut Cavusoglu have met on the sidelines of the Antalya Diplomacy Forum.

During the meeting, Gunay Afandieva expressed gratitude to the Turkish FM Mevlut Cavusoglu for the invitation to participate in the Antalya Diplomacy Forum and noted that Turkey was the first country to organize a meeting of world leaders, politicians and diplomats after a long break.

Drawing attention to the existing close cooperation between the founding country of the Foundation - Turkey and the organization, Gunay Afandiyeva stressed that in the future the Foundation will continue to carry out activities in the direction of promoting the culture, customs and traditions of Turkey, which is an integral part of the Turkic world and other Turkic-speaking countries. Expressing, as the head of the Turkic International Organization, pride in Turkey's fair position in the liberation of the ancestral lands of Azerbaijan, Gunay Afandiyeva said that the Foundation plans to implement various projects related to Karabakh, one of the brightest cultural centers of the Turkic world.

Turkish Foreign Minister Mevlut Cavusoglu congratulated President of the International Turkic Culture and Heritage Foundation Gunay Afandiyeva with her speech at the panel conference on the topic "Women's Contribution to the Search for peace", held as part of the Antalya Diplomacy Forum. The Minister noted that he closely followed the work done by the Foundation and highly appreciated the activities of the organization in the direction of rapprochement of the Turkic-speaking peoples. He also emphasized that he would assist in supporting projects and events organized by the Foundation in order to protect the material and cultural heritage of the Turkic world, as well as promote it in the international arena and pass it on to the younger generation.