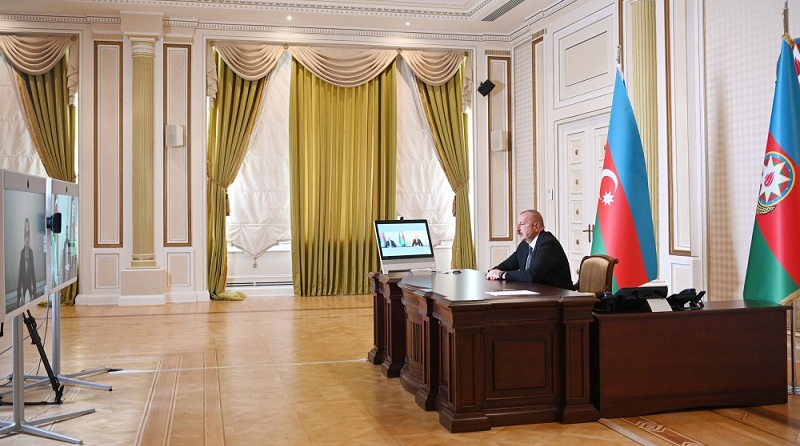 President of the Republic of Azerbaijan Ilham Aliyev has received in a video format Zaur Mikayilov due to his appointment as Chairman of Azerbaijan Melioration and Water Management Open Joint Stock Company.

The head of state made a speech at the video meeting.

Calling the melioration and water management one of Azerbaijan’s priority areas, President Aliyev said he has always attached great importance to this area.

“Today, in the current situation, the importance of this area is growing. Great work has been done in this area in recent years. Major work has been done to repair the old infrastructure because most of it had been built during the Soviet era and fell into disrepair over time. So there was a need for that,” he said.

The head of state noted that several large reservoirs were built in Azerbaijan on his own initiative.

“I must say that along with irrigation, the Takhtakorpu water reservoir, built on my initiative, is also an important infrastructure facility to provide Baku with drinking water. The construction of the Takhtakorpu-Jeyranbatan water canal created conditions for maintaining the required water level in the Jeyranbatan reservoir. If we take into account the drought of the last two years, it is clear that if the Takhtakorpu reservoir and the water canal had not been built in good time, there would have been a very serious water problem in Baku. The Shamkirchay reservoir was built after the Takhtakorpu one. Thus, tens of thousands of hectares of previously unirrigated land in both the northern and western regions of the country started to be irrigated. This is already manifested in the increase in agricultural production and productivity,” he added.

The Azerbaijani president also noted that land reclamation measures are of special importance for each country, especially for those with limited water resources.