Rumblings of regional strife in the Caucasus could make its way to Israel: OPINION 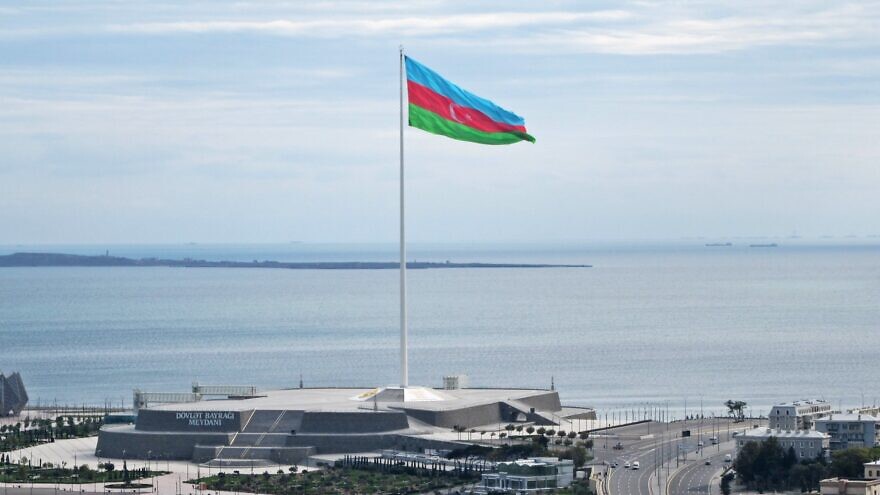 Jewish News Syndicate (JNS) has published an article titled “Rumblings of regional strife in the Caucasus could make its way to Israel”.

One of the most unexpected, lesser known and not often reported bilateral relationships is the ties between Israel and Azerbaijan. While both countries are small, Israel is constantly garnering global headlines and attention for better or worse. The same cannot be said for Azerbaijan, which generally stays out of the news despite its strategic importance.

However, an ongoing escalation in violence between Azerbaijan and its neighbor Armenia is threatening to spill over into an all-out conflict that could draw in several regional powers, such as Russia, Turkey, Iran and maybe even Israel.

Azerbaijani Ambassador to the United States Elin Suleymanov told JNS that the international community is ignoring Armenia’s aggression against his country, which is a close ally of the Jewish state.

“Israel is clearly disproportionately targeted for criticism while Armenia is doing things much worse,” said Suleymanov, referring to Armenia’s “ethnic cleansing” of some 1 million Azerbaijanis in the disputed territory of Nagorno-Karabakh that is occupied by Armenia.

“What bothers us very much is that there is a clear double standard around the world,” he said. “People so actively criticize all over occupations, but when it comes to Armenia and Azerbaijan, people become very philosophical. There is no unequivocal condemnation of an illegal occupation, which shows a clear indication of bias.”

In recent days, the long-simmering conflict between the two countries has erupted with some fearing the escalation could spiral into a war between the neighbors. Fighting broke out last weekend on the border between Tavush in northeastern Armenia and the Tovuz district in Azerbaijan. At least 11 Azerbaijani soldiers and one civilian have been killed, according to the country, while Armenia reported that four of its soldiers have died.

“Unfortunately, the Armenia side decided to launch a cross border attack against Azerbaijan itself. We don’t know exactly the motivation for it. One can only guess,” said the ambassador.

According to a statement from the Armenian National Committee of America, “Azerbaijan has launched a military offensive against Armenia starting on July 12, deploying tanks, heavy artillery and drones against civilian and military targets alike.”

While the exact cause of the recent escalation remains unclear, the fact that it occurred not in Nagorno-Karabakh, but along the internationally recognized boundaries between the two countries raises concern. At the same time, that area is also close to several strategic oil pipelines running from the Caspian Sea to the Black Sea and the Mediterranean, which also supply some 40 percent of Israel’s oil.

Azerbaijan is one of the largest purchasers of arms from the Jewish state. According to the Stockholm International Peace Research Institute, the country had purchased $127 million in 2017. Israeli Prime Minister Benjamin Netanyahu said in 2016 that Azerbaijan had bought $5 billion worth of weapons from Israel. So far, Israel has not weighed in on the flareup between the two countries.

“We are always in touch and engaging in dialogue with Israel, especially on defense,” said the ambassador. “They are major contributors to Azerbaijan’s security and defense production.”

Both Armenia and Azerbaijan are former Soviet Republics, regaining their independence following the collapse of the Soviet Union in the early 1990s. Since then they have been stuck in an unresolved conflict over the disputed Nagorno-Karabakh region, which is internationally recognized as part of Azerbaijan, but now controlled and occupied by ethnic Armenians.

Situated in the southern Caucasus Mountain region, Azerbaijan is the only country that borders both Iran and Russia, making it strategically important to regional powers. A Turkic people who are Shi’ite Muslim, Azerbaijanis are also in the singular position of sharing religious and ethnic ties with both the region’s two other major powers: Turkey and Iran. In fact, it is estimated that more Azeris live in Iran than in Azerbaijani itself.

Due to its geostrategic importance, Azerbaijan seeks to maintain friendly relations with its neighbors and even countries farther away.

“Azerbaijan is a friend of Israel and the Jewish people,” affirmed Suleymanov. “We have had the Jewish community in our country for 2,500 plus years. Jewish people are part in parcel of the Azerbaijani mosaic.”

In March, Azerbaijan’s finance minister, Samir Sharifov, became the first country with a Shi’ite majority to have a cabinet-level minister give a speech at the annual AIPAC Policy Conference.

At the same time, Israel has also sought to develop warmer ties with Armenia, one of the world’s oldest Christian countries. Armenia recently announced the opening of its embassy in Tel Aviv.

Relations between Israel, Azerbaijan and Armenia are also complicated by Iran.

Due to its border with Iran and the fact that many Azeris reside there, Azerbaijan maintains ties with the regime, despite Iran also having warm ties with Armenia.

Similarly, by having close defense ties with Israel, Azerbaijan has placed itself on both sides of the conflict between Jerusalem and Tehran. “We maintain our relationship bilaterally with both countries; it’s not dependent on each other,” explained the ambassador. “We always openly have a strong partnership with Israel. It is not directed against anybody. It is in support of each other. Our relationship with Iran is not against anybody either.”

With thousands of Azerbaijanis taking to the streets of the country’s capital of Baku on Wednesday demanding the government to mobilize its troops to retake Nagorno-Karabakh, despite restrictions related to the ongoing coronavirus pandemic, it remains unclear if the country is headed for war in the near future.

“On this day when Azerbaijan is attacked and does not get the same coverage as other cases around the world, what I would urge to our friends in Israel and the Jewish community is to make our friendship stronger to reach out to Azerbaijan and to tell the world the story of our successful partnership,” said Suleymanov. “They should know they have a friend in the south Caucasus.”