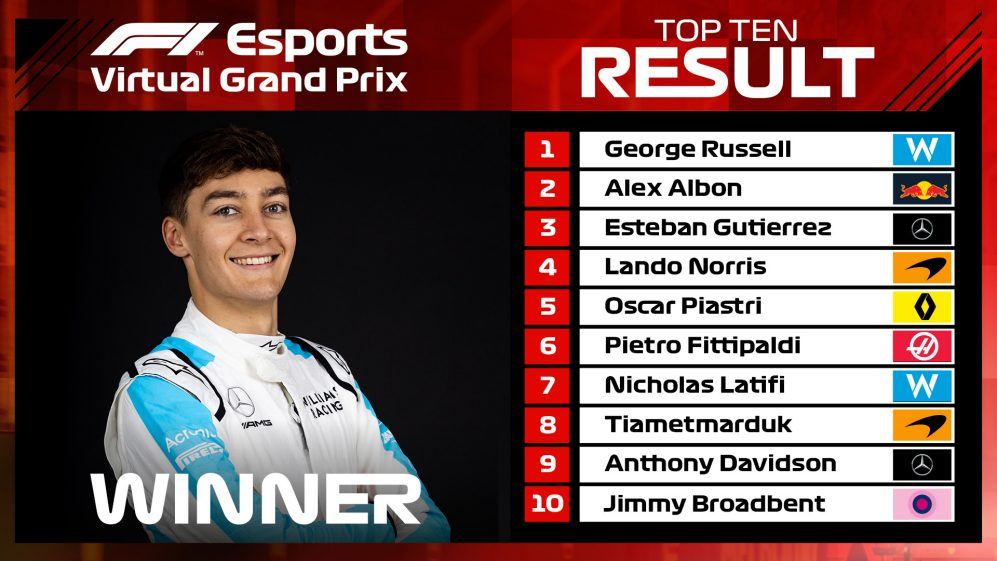 George Russell may be yet to score a Formula 1 World Championship point despite a full season under his belt with Williams, but he is rapidly becoming the king of virtual racing after he sealed his third F1 Esports win in a row on Sunday evening, Formula 1 reports.

The Williams driver came out on top in a thrilling wheel-to-wheel duel with Charles Leclerc in the Virtual Spanish Grand Prix last month and then utterly dominated to win by almost 40 seconds in Monaco two weeks ago.

And this weekend he was once again in imperious form in the Virtual Azerbaijan Grand Prix, snatching pole position from his great friend and rival Alex Albon right at the death of qualifying.

Once the lights went out to start the race there were spins and crashes galore as the field tried to squeeze through turn 1, but Russell and Albon – who started second – were able to get away cleanly and begin to build up a lead.

It soon became clear the battle for the win was between the Williams driver and his Red Bull counterpart, and the two opted for differing tyre strategies as they tried to get the upper hand.

Russell pitted on lap 8 to swap his softs for a set of mediums, while Albon bolted on the hard tyres for his second stint. Russell was hoping to stretch his lead while his tyres were fresh but was unable to pull further away from the Red Bull, despite being on the faster rubber.

Over team radio Russell was heard telling his race strategist he was worried his tyres could drop off, leaving him a sitting duck for an attack from Albon, but in the end he was able to take the chequered flag more than three seconds ahead of his rival.

It was another superb win for the Williams driver who has become the dominant force in Virtual Grand Prix racing with this hat-trick of wins on a day when Charles Leclerc – the early pace setter in the series – had a poor race, eventually coming home just 14th after a difficult qualifying session and a messy Grand Prix.