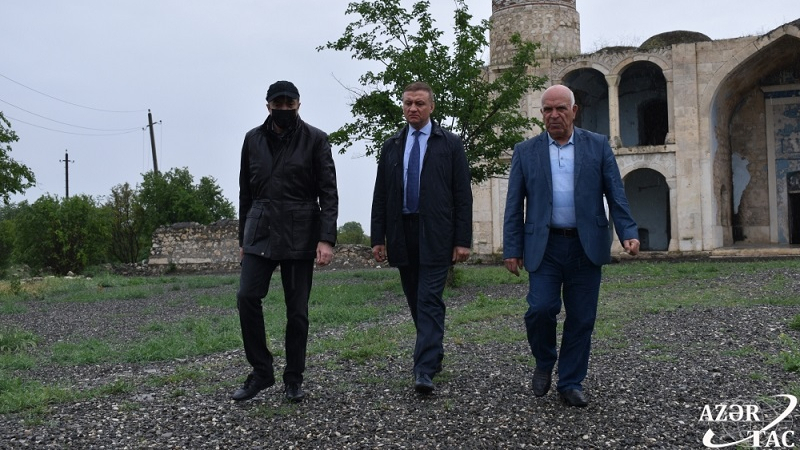 Member of State Duma of the Russian Federation, Chairman of Russia-Azerbaijan Inter-Parliamentary Friendship Group Dmitry Savelyev has visited liberated from Armenian occupation the city of Aghdam to witness the atrocities committed by Armenians there.

The Russian MP was accompanied by Azerbaijani MP Nizam Safarov.

The Russian MP was informed that before the Armenian occupation, Aghdam was one of the largest and most developed cities not only in the Karabakh region, but in the entire country. However, after the city was seized by Armenia, all the residential infrastructure, including apartment buildings, kindergartens, schools, and hospitals were demolished, production facilities, as well as Aghdam’s Alley of Martyrs were looted and destroyed. Today, Aghdam left in ruins, once a vibrant regional center.

Savelyev also visited ruins of Imarat cemetery and Bread Museum which is considered the second in the world that contained a collection of rare exhibits - archeological finds related to grain growing. It was noted that the Imarat cemetery contained the tombs of Panahali khan, the founder of the Karabakh khanate, as well as the tombs of Ibrahimkhalil khan and his son Mehdigulu khan, daughter of Mehdigulu khan, poet Khurshidbanu Natavan. Other prominent descendants of the Karabakh khans have also been buried in this cemetery. After the Armenian occupation of Aghdam, the cemetery has been vandalised and desecrated by Armenians, who destroyed the tomb of Ibrahimkhalil Khan and the tombstone of Natavan. The Palace of Khan was turned into a piggery and stable.