Russian officer injured in mine explosion in Karabakh 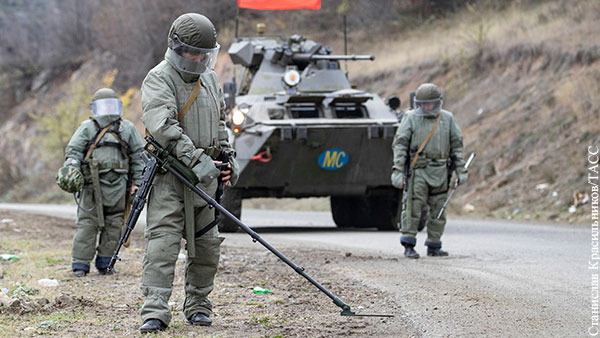 A Russian officer was wounded by a mine explosion while searching for the dead in Nagorno-Karabakh, the Russian Defense Ministry said, according to TASS.

According to the ministry, on November 23 a joint group for exchange of bodies of dead servicemen consisting of representatives of Russian peacekeepers, Azerbaijani Armed Forces and International Committee of Red Cross searched for the dead in Tartar district.

Mine explosion occurred near Sugovushan settlement while carrying out works. The explosion injured a Russian peacekeeper. One officer of the Armed Forces of the Azerbaijan Republic was killed.

"A Russian serviceman was taken to a hospital in Baku, where he is provided with necessary medical care," the ministry added.

According to the Defense Ministry, joint groups for search and transfer of bodies of those killed during the conflict, created on the initiative of the command of Russian peacekeepers, have been working harmoniously and effectively for more than a week. All bodies found as a result of their work are handed over to the parties for burial.