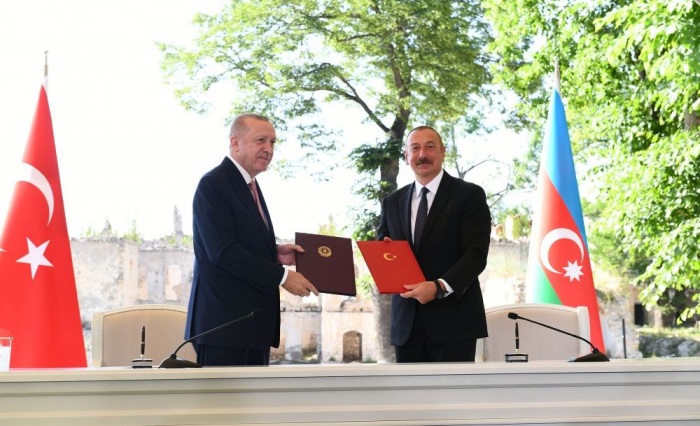 On June 15, President of the Republic of Turkey Recep Tayyip Erdogan paid a historic visit to Shusha city, liberated from Armenia's occupation, and a historic declaration was signed in the heart of Karabakh.

Presidents Ilham Aliyev and Recep Tayyip Erdogan signed the Shusha Declaration on allied relations between the two friendly and brotherly countries on a very important date for Azerbaijan - National Salvation Day, a hundred years after the Kars Agreement.

The Shusha Declaration on Allied Relations is of exceptional political and historical significance.

The Azerbaijani-Turkish relations, characterized by the statements of the national leader of the Azerbaijani people Heydar Aliyev "One nation, two states" and founder of the Republic of Turkey Mustafa Kemal Ataturk "The joy of Azerbaijan is our joy, its sorrow is our sorrow", were brought to the highest level and entered into a new stage.

This historic document, being the logical result of the mutual coordination of the activity of the two fraternal countries to protect common interests, unite opportunities, as well as in regional and international strategic issues of mutual interest, will strengthen the international and regional role of Azerbaijan and Turkey and increase their authority.

The joint initiatives of the two countries to strengthen stability and security, restore all economic and transport ties, as well as normalize relations between the regional countries and ensure sustainable peace in the Caucasus region is the best example demonstrating the need for even bigger efforts in this sphere.

At the same time, the activity of the Turkish-Russian joint center in the Nagorno-Karabakh region attracts attention as an effective mechanism for restoring peace in the region.

The Shusha Declaration on Allied Relations, guided by the principles of independence, sovereignty, territorial integrity, inviolability of internationally recognized borders, non-interference in the internal affairs of countries, is important from the point of view of strengthening political and legal mechanisms for establishing allied relations from both countries pursuing the independent foreign policy aimed at ensuring and protection of national interests.