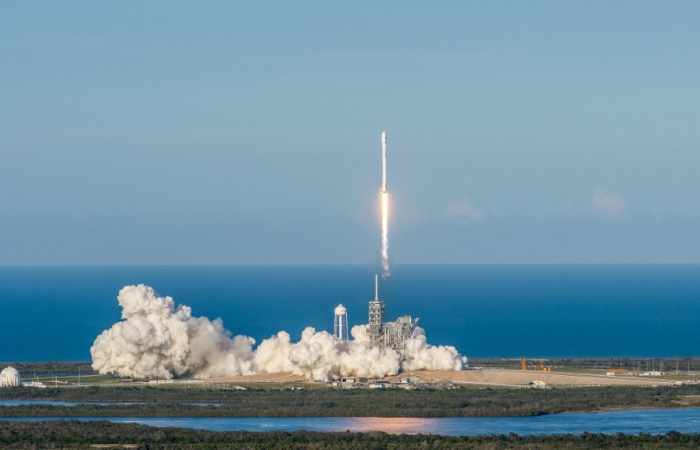 The mission was supposed to happen Sunday, but SpaceX delayed its flight because of a sensor problem on the bottom part of the rocket.

The customer for the launch was the National Reconnaissance Office, a U.S. government agency that develops and maintains spy satellites.

The payload, referred to as NROL-76, is classified. SpaceX shared no details on what type of surveillance the device will perform, how large it is or where in orbit it's being delivered.

The NRO says it surveys potential threats to the United States by tracking terrorists and monitoring the development of nuclear weapons in other countries. It can also provide an early warning of a potential missile strike.

SpaceX typically broadcasts entire missions online, but this time the company shut off footage of the launch just after the first-stage booster separated from the upper stage of the rocket.

SpaceX also achieved one of its defining endeavors: landing the rocket safely back on Earth.

About seven minutes after liftoff, the first-stage rocket booster separated from the upper stage and fired up its engines again so it could safely cut back through the Earth's atmosphere. An on-board computer then guided the rocket to a pinpoint landing on a 300-foot platform back at Kennedy Space Center.

The maneuver is done by no other rocket launcher. Rockets are typically discarded after a mission.
It's all part of the company's mission to drastically reduce the cost of space travel by using rockets more than once. Last month, SpaceX made huge strides toward that feat by putting a used rocket back into action.

The rocket used Monday was new. Its successful landing back on Earth marked the 10th time SpaceX has recovered one of its rockets.

The company says some of those will be put to use later this year. It's planning as many as six more missions with used rockets in 2017.