I have come to Shusha using the victory road – Azerbaijani President 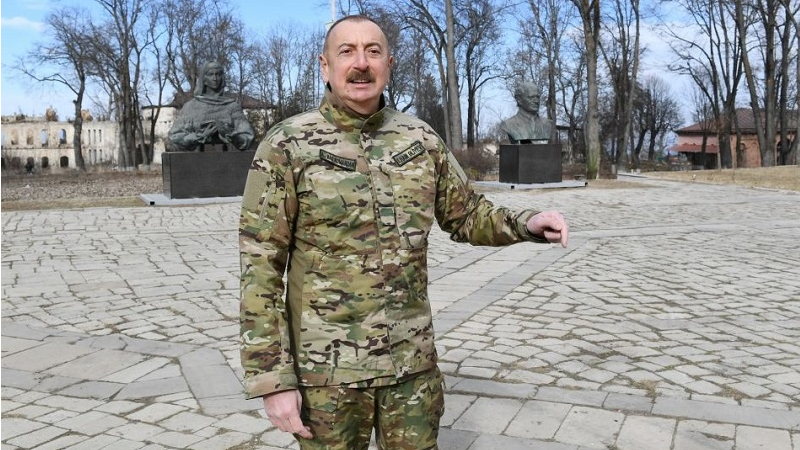 I have come to Shusha using the victory road, President of Azerbaijan Ilham Aliyev said during a meeting with the servicemen in Shusha.

“8 November will forever go down in the history of our people. On 8 November, Azerbaijan won a brilliant victory by liberating our ancient city of Shusha from the enemy. The liberation of Shusha required great heroism, professionalism, and national spirit. The Azerbaijani army demonstrated all these sublime features,” the head of state said.

“I have come to Shusha using the victory road. That road is now open. There was none before. Passing through mountains, forests, valleys, and tens of kilometers, the heroic Azerbaijani army liberated villages and settlements along the way, approached the city of Shusha, liberated the village of Dashalti, and then liberated Shusha from the occupiers,” he noted.

President Aliyev said he is confident that the Shusha operation will be included in the textbooks of leading international military schools.

"I already know that experts from many developed countries analyze every single day of the 44-day war. Because every day of the 44-day war is a day of victory. The liberation of Shusha was the greatest blow to the enemy because the enemy thought that it was impossible to liberate Shusha, and they were probably right to some extent. Because Panahali khan built this city in such a way that steep rocks and natural landscape protect Shusha from all sides. In May 1992, Shusha was occupied as a result of the betrayal of the then leadership of Azerbaijan and the PFPA-Musavat duo fighting for power. At that time, the Armenians gave their so-called operation a name – wedding in the mountains. But there was no operation. The city of Shusha was vacated. The then minister of defense said that if Shusha was lost, he would shoot himself in the head. He cowardly fled Shusha. After that, the Armenians invented legends about this operation – the alleged wedding in the mountains. We have arranged a wedding for them they will remember forever. The heroic sons of Azerbaijan liberated Shusha from the occupiers by conducting a perfect military operation, demonstrating courage, bravery, heroism, strength, and national spirit, and after a long break the Azerbaijani flag was raised in Shusha on 8 November,” the head of state added.