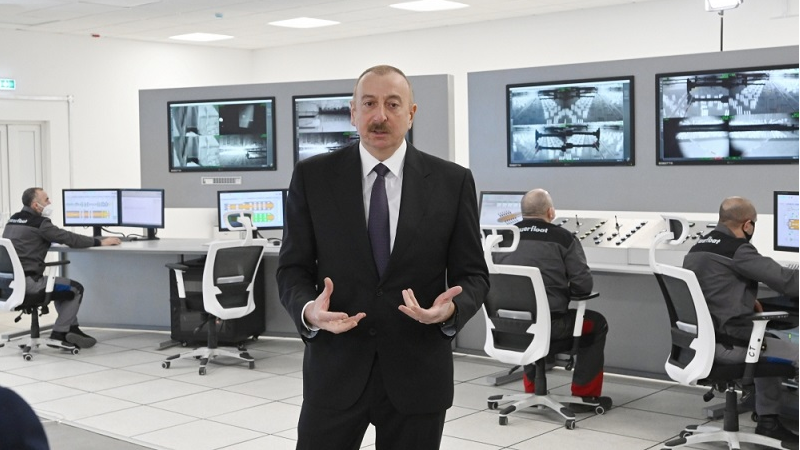 Sumgayit is not only the second-largest industrial city in Azerbaijan and the South Caucasus now but also a modern industrial center, President Ilham Aliyev said in an interview to Azerbaijan Television following a groundbreaking ceremony for the Azersulfat LLC sulfuric acid production plant and Glassica CJSC glass container production plant and the inauguration of the Azerfloat CJSC thermoforming sheet glass plant at the Sumgayit Chemical Industry Park.

The head of state noted that all enterprises established in Sumgayit in recent years meet the highest environmental standards.

“This is of special importance for Sumgayit. Because Sumgayit used to be a place of ecological disaster,” he said.

“When turning Sumgayit into a modern industrial center, we have taken into account people’s health as a matter of priority. As you know, many enterprises built here during the Soviet era had reached the end of their service life, fallen into disrepair, and had a very negative impact on the environment. Those enterprises were knocked down and the Sumgayit Chemical Industry Park covering an area of 500 hectares was established ten years ago on this territory on my instruction. In recent years, this industrial park has grown and expanded so much that the order was issued to find additional land, so work in this direction is underway,” President Aliyev added.

The head of state continued: “I personally laid the foundation of this enterprise in 2017, and I am glad that this large project worth 100 million euros has already been implemented and will free us from the import of sheet glass. This means that currency will stay in our country, local production will be revived, jobs will be created and our economy will be diversified. We have been able to maintain our resilience even at a time when world oil prices are low. At a recent meeting on the results of the year, I noted that our foreign exchange reserves have not decreased, in fact, they have increased, albeit slightly. How? Because the non-oil sector has developed successfully. In all countries of the world, 2020 has been a year of economic recession, and so it was for Azerbaijan. But our decline was only 4.3 percent. In some developed countries, this decline is measured in larger numbers. In our non-oil industry, a growth of 12.5 percent was achieved thanks to such enterprises. Industry, agriculture, the non-oil sector, export opportunities, reduction of the dependence on imports – all these factors have created a new reality today. Thus, the long-term sustainable development of our country will be ensured.”