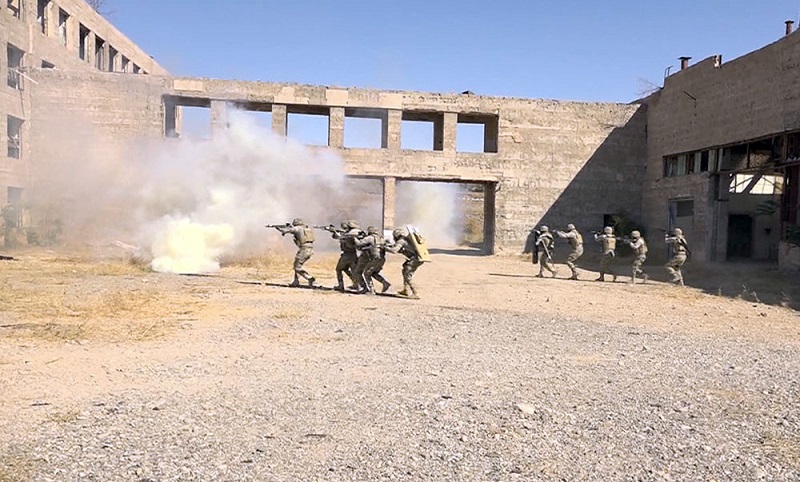 The Combined Arms Army of the Azerbaijani Armed Forces held the next tactical-special exercises, the country’s Defense Ministry told News.Az.

Commander of the Combined Arms Army, Colonel General Kerem Mustafayev, and representatives of the Turkish Armed Forces watched the exercises held to improve skills of personnel to conduct counter-terrorism operations.

In accordance with the exercises scenario, on the basis of information obtained via the unmanned aerial vehicles and other reconnaissance means, specially trained enemy terrorist groups carry out illegal transportation to ammunition depots in order to commit a provocation against the civilian population.

The Special Forces Units are launching a counter-terrorism operation in order to capture the terrorist group's leader alive, as well as to detect and destroy ammunition depots.

The Special Forces with the support of transport-combat helicopters are assaulting the building where the terrorists are hiding.

During the counter-terrorism operations, special attack groups entering the building by the use of various methods and means continue to neutralize the provocateurs.

The Special Forces neutralized the terrorists with the use of close combat and fire methods, detected and blew up the enemy's ammunition depots.

The leader of the terrorist group, attempting to escape from the operation area, was ambushed by the special group in the other direction and captured alive.

An award ceremony was held on the occasion of the successful completion of the exercises, in which a group of servicemen of the Turkish Armed Forces participated as observers and instructors.

The Commander of the Combined Arms Army, Colonel General Kerem Mustafayev spoke at the ceremony about the friendly relations and military cooperation between Azerbaijan and Turkey, and stressed that during the exercises the Special Forces fulfilled the assigned tasks with high professionalism, as in the 44-day Patriotic War.

In the end, the servicemen were presented with valuable gifts.