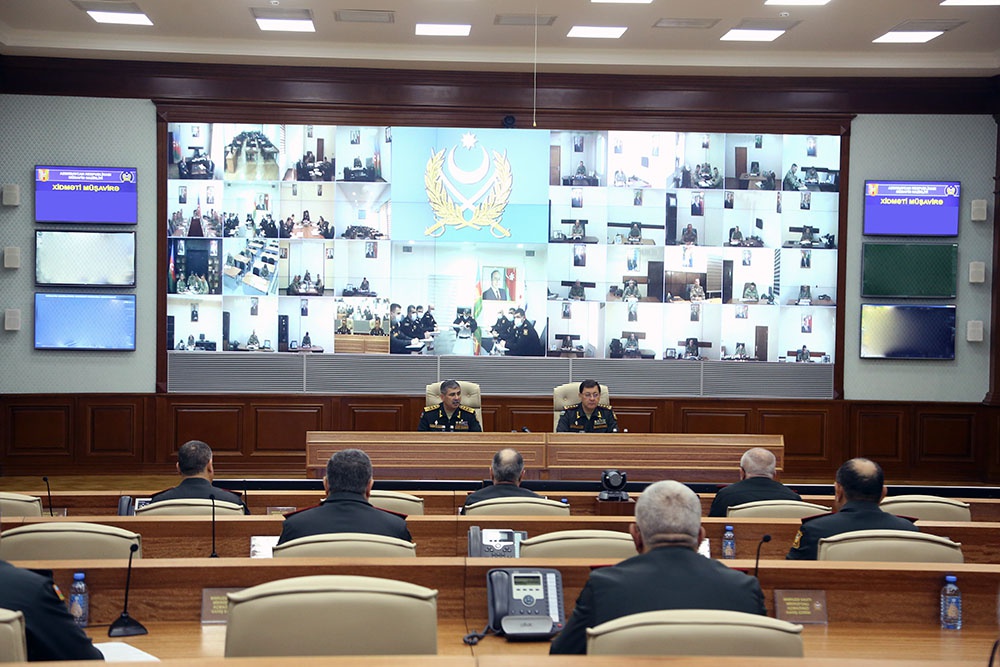 The minister noted that emphasizing the issue of army development and stressing the readiness to carry out any task by Azerbaijani President Ilham Aliyev in his recent speech, is the highest evaluation of the combat capability of the Azerbaijan Army. This evaluation further improved the moral-psychological state and increased the fighting spirit of the military personnel.

Minister Hasanov said that these words of the Supreme Commander-in-Chief of the Armed Forces are order for the command staff of the army, and the military personnel must be ready to deliver devastating strikes against the enemy in all directions to liberate our lands. The enemy must realize that the steps that we will undertake this time would be different from the April 2016 ones, and the blows to be delivered will lead to his political, economic, and military collapse as a whole.

Highly appreciating the results of the recently completed Large-Scale Operational-Tactical Exercises, the minister noted that the main attention was paid to increasing the professionalism of military personnel and military command and control bodies, as well as on the practical use of combat equipment and other military means. He emphasized that the troops have fully achieved their goals, the military personnel amassed its practical experience and skills in carrying out combat operations and also demonstrated real abilities in the field.

Hasanov demanded to further improve the quality of intensive training with military personnel on combat training, practical shooting, and control of various military equipment that is being conducted in training centers and training ranges.

The minister, noting that one of the keys to the success of the Azerbaijan Army is a high ideological and moral-psychological training of military personnel, emphasized the importance of further expanding activities in this field and increasing its effectiveness in accordance with the recommendations of the Supreme Commander-in-Chief.

Minister Hasanov said: “A positive consequence of the ideological work carried out with the military personnel is that the campaigns conducted by the enemy and the forces supporting him against our army do not and will not yield any results. We are sure that due to the support of Mr. President and the state, at the same time, the efforts of the patriotic forces will reveal hostile intentions towards the Azerbaijani soldier, and those who take part in these actions will have been brought to responsibility within the law”.

He noted that as a result of the successful foreign policy of the President of the Republic of Azerbaijan, the military-technical capability of the Azerbaijan Army has significantly increased today. The regular equipping of our units with modern weapons and military equipment made in Turkey, France, Spain, Italy, Israel, Russia, Belarus, and other countries with developed defense industry demonstrates the significant superiority of our army over the enemy in terms of logistic support.

The minister gave specific instructions to command staff to continue active reconnaissance in the depths of the enemy’s defense using modern equipment, to improve the conditions of combat duty, to ensure the safety of military personnel, to increase the level of combat and mobilization readiness, to provide medical services to servicemen and on the other issues.