The increasing role of Azerbaijan as a regional digital hub: OPINION 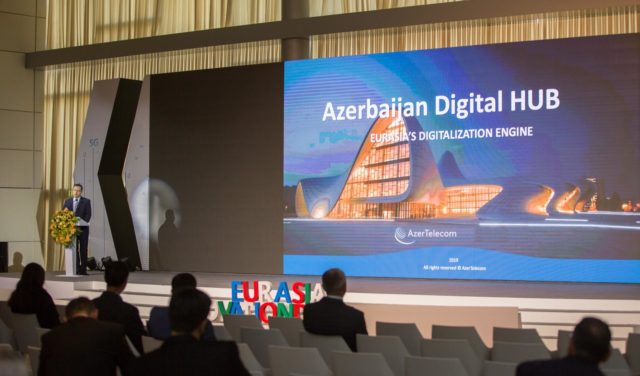 The Jamestown Foundation has published an article, entitled “The Increasing Role of Azerbaijan as a Regional Digital Hub.”

The article by Orkhan Baghirov, a leading advisor at the Baku-based Center of Analysis of International Relations, where he is in charge of research on international and regional economic affairs, reads:

On April 10, the Azerbaijani parliament ratified and President Ilham Aliyev approved a law for laying a trans-Caspian fiber-optic cable across the bottom of the Caspian Sea between Azerbaijan and Turkmenistan (President.az, April 10). The initial interstate agreement—“On the Organization of Activities by Communications Operators of Azerbaijan and Turkmenistan in relation to the Joint Construction of Fiber-Optic Transmission Lines Along the Bottom of the Caspian Sea on the Azerbaijan-Turkmenistan route, Their Ownership, and Use”—was signed in November 2019, in Ashgabat, Turkmenistan (Trend, November 29, 2019).

According to the bilateral pact, the project will be implemented jointly by AzerTelecom LLC and Turkmenistan’s Turkmentelekom. AzerTelecom, a telecommunications operator in Azerbaijan, active since 2008, is a backbone Internet Service Provider (ISP) that offers international fixed telephone connections, Internet access, as well as data and voice transportation, connecting Azerbaijan with global telecommunications networks via newly built infrastructure (Azertelecom.az, accessed May 18).

With high data-transmission capacity, the new undersea fiber-optic cable will link the cities of Siyazan, Azerbaijan, and Turkmenbashi, Turkmenistan. The creation of this line will substantially contribute to the formation of the so-called “Digital Silk Road” between Europe and Asia by connecting the Internet centers of Frankfurt and Mumbai. It will also enable the transmission of web traffic from Europe to Turkmenistan, Uzbekistan, Afghanistan, Pakistan and India via Azerbaijani territory. By participating in the creation of this trans-Eurasian digital telecommunication corridor, Azerbaijan is positioning itself to become a regional digital hub.

The construction of the trans-Caspian fiber-optic cable is part of AzerTelecom’s ambitious “Azerbaijan Digital Hub” program, whose main goal is to upgrade the domestic telecommunication infrastructure to meet standards found in advanced economies as well as to eliminate Azerbaijan’s dependence on other countries for Internet access. In the long term, the associated projects will enable Azerbaijan to become the region’s main seller of Internet access, transforming this Caspian littoral state from an importer to an exporter of digital services (Azertelecom.az, accessed May 19). This program will be developed in three phases. In the first phase, necessary local and foreign infrastructure will be established. In the second phase, Baku city will be added to the global Internet map as a new Internet exchange point (IXP). The third phase envisages the formation of a robust digital ecosystem in Azerbaijan.

With the implementation of the “Digital Hub” program, Azerbaijan will become a regional cyber-services center not only for the South Caucasus but also more widely, for the Middle East, Central Asia and South Asia. As a new IXP, along with more established hubs such as London, Frankfurt, Sofia, Istanbul, Moscow, Amsterdam and Dubai, Baku will improve access to various digital services to 1.8 billion people (Caspiannews.com, December 13, 2019).

The infrastructure projects within the framework of the “Azerbaijan Digital Hub” program outside the country also include construction of another fiber-optic cable along the bottom of the Caspian Sea between Azerbaijan and Kazakhstan. Based on an agreement signed in 2018, the inauguration of the construction of this line took place in Aktau, Kazakhstan, in November 2019, with the participation of top officials from both sides (Kazinform, November 19, 2019). Measuring 380–400 kilometers, this line will have a data-transmission capacity reaching 4–6 terabits per second. From the Kazakhstan side, construction will be carried out by Transtelecom JSC and KazTransCom. According to the press service of the Kazakhstani prime minister’s office, the cable should begin operation by the end of 2021 (Primeminister.kz, November 19, 2019).

The “Azerbaijan Digital Hub” program additionally envisions the installation of fiber-optic cable lines along the protection line of Azerbaijan’s railway corridors. To make that happen, in early 2019, AzerTelecom signed an agreement with the national railroad operator, Azerbaijan Railways (Trend, January 21, 2019). These lines will connect various international telecommunications operators in the north-south and east-west directions. The initiative will also support the development of Azerbaijan Railways’ infrastructure by introducing modern technologies and digitalization.

Collectively, the above-described projects will substantially contribute to the development of Azerbaijan’s Information and Communication Technologies (ICT) sector. They will also make an important contribution to the development of the domestic non-oil sector as well as help create new jobs by attracting global ICT companies to Azerbaijan (Strategeast.com, June 14, 2019). Furthermore, these projects will help diversify the economy, in line with the Azerbaijani government’s official pledge to restructure the national economic system beyond hydrocarbons. Finally, the establishment of a sustainable digital foundation will enable the implementation of the newest technological innovations throughout the various sectors of the domestic economy and allow Azerbaijan to advance its position in the various international business/IT/economic development rankings that help guide the flows of global investment.

In general, the implementation of the “Digital Hub” program and the construction of new fiber-optic lines will strengthen Azerbaijan’s position as a connector between Asia and Europe. After gaining independence, Azerbaijan actively initiated and participated in a number of important regional and transcontinental energy and transportation projects, including the Baku–Tbilisi–Ceyhan oil pipeline, the Southern Gas Corridor and the Trans-Caspian International Transportation Route. Now, by pursuing the above-mentioned domestic as well as transborder telecommunications projects, Azerbaijan is looking to add the status of a regional digital center in addition to its existing roles as important energy and transport hubs.