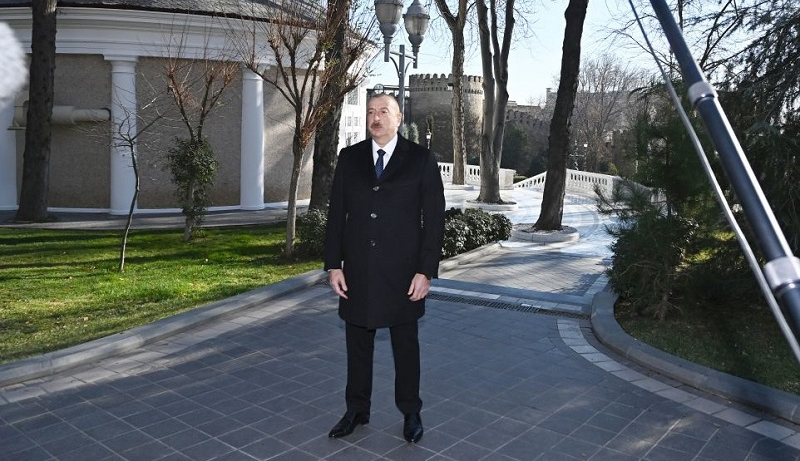 Today, the Heydar Aliyev Foundation faces new tasks, President of the Republic of Azerbaijan Ilham Aliyev said as he made a speech after the ceremony to unveil a monument to philanthropist Haji Zeynalabdin Taghiyev in Baku, News.Az reports.

“In addition to its traditional activities, the Foundation has launched extensive activities in the liberated lands. At present, the process of overhaul, restoration and construction of our religious sites has begun at the initiative of the Foundation in the liberated lands. The Yukhari Govharagha, Ashaghi Govharagha and Saatli mosques in Shusha, the Aghdam city mosque and the Zangilan city mosque are being overhauled by the Heydar Aliyev Foundation. At the same time, the construction of new mosques in Dashalti, Hadrut and Shusha has been initiated by the Heydar Aliyev Foundation. The number of these religious sites alone is eight, and I am sure that the Foundation will take an active part in other projects. As you know, the construction of new IDP settlements was also initiated by the Heydar Aliyev Foundation and I attended the commissioning of a number of large multi-storey houses in Gobu settlement,” President Aliyev said.

“In other words, these traditions do exist, are being carried on and are highly valued in our society. After the war, the Karabakh Revival Fund and the “YASHAT” Foundation were established on my initiative. At the same time, Azerbaijani citizens and companies voluntarily donate funds to both the Karabakh Revival Fund and the “YASHAT” Foundation. Today, hundreds of veterans are receiving treatment, returning to life and restoring their health both in Azerbaijan and abroad. This once shows that charity has always been an integral part of the Azerbaijani people. It was simply necessary to create conditions for it. This policy had to be supported by the state, and we are seeing it today,” the head of state added.