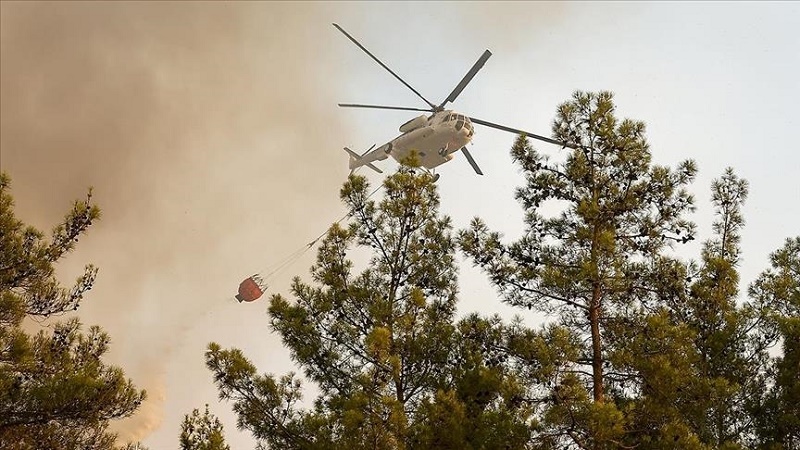 Fire brigades took the fire in Mersin province under control according to Agriculture and Forestry Minister Bekir Pakdemirli. The forest fire first emerged in the Silifke district on Thursday and spread to the Gulnar district on Saturday due to the strong wind.

Intense efforts by the authorities helped contain the fire, which forced the evacuation of surrounding settlements to prevent possible life loss earlier.

Meanwhile, the aerial extinguishing operations have started once again in the Marmaris and Koycegiz districts of the Mugla province in the southwest.

The fire first set ablaze the forest in Sirinyer on Wednesday and spread to many other locations due to the wind, while Turkish authorities relentlessly fought against the fire day and night.

Early in the morning, an aerial fleet containing 12 helicopters and three planes started their operation to put off the fires. Also, ground forces -- including a group of 100 Azerbaijanis sent to Turkey to assist the ongoing efforts -- along with locals, are fighting the fires.

Additionally, the fire in the resort district of Bodrum in Mugla was contained, according to Pakdemirli, who said units were now cooling down the fire zones.

The forest fire ongoing in the Gazipasa district of the southern Antalya province for two days straight was also contained, and the area was being cooled down, Pakdemirli said.

The fire first erupted in three different locations of Kucuklu and Incegiz neighborhoods located only 10 kilometers (6.2 miles) to the district center and quickly spread due to wind.

Helicopters and fire brigade trucks have battled the fire for days before finally taking it under control.

In the Manavgat district of Antalya, authorities are fighting to control the fire, which erupted in four different locations on July 28, through aerial and ground operations. Local people join in forces with brigades to put off the fire.

Pakdemirli shared figures on his Twitter account, saying a total of 112 fires have erupted since July 28 and 107 of them have been contained.

The efforts to contain the remaining five fires are underway in the Manavgat and Gundogmus districts of Antalya, along with Marmaris, Koycegiz, and Milas districts of Mugla, he added.