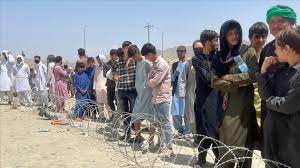 Erginay stated that he and Muttaqi exchanged views on topics such as education, health and development, and thanked Muttaqi for "his warm hospitality."

The Taliban victory in Afghanistan has not led to a dramatic refugee exodus but the country urgently needs humanitarian aid to prevent economic collapse and major upheaval, according to the United Nations.

Half a million people had been displaced within Afghanistan in recent months, U.N. High Commissioner for Refugees (UNHCR) Filippo Grandi said, a number which would grow if health services, schools and the economy break down.

Even before the Taliban launched its final push to seize control, 3 million Afghans were already displaced in a country struggling with drought and the COVID-19 pandemic, and where nearly half the population was receiving some form of aid.

The UNHCR said recently that up to half a million Afghans could leave their homeland by the end of the year in a worst-case scenario.

Foreign Minister Mevlüt Çavuşoğlu told a live broadcast on NTV recently that the best way to solve the Afghan migrant crisis is to solve the conflict domestically to ensure that people are not forced to leave their homes.

Some 570,000 people migrated in the past year, while 3 million fled Afghanistan in 2020, Çavuşoğlu said, adding that economic problems were the main reason behind the migrations. He said it is crucial to also provide assistance to neighboring countries like Pakistan, Uzbekistan and Iran.