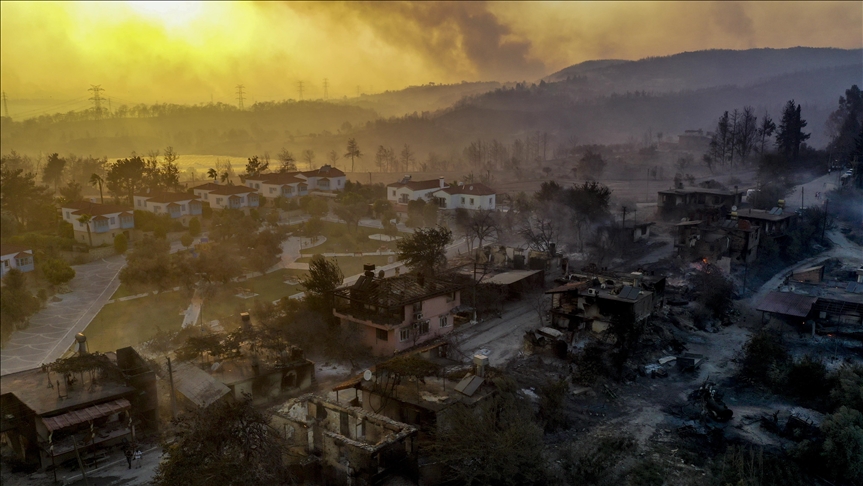 Turkey is battling wildfires that have broken out in 41 different areas recently, with 31 of them successfully brought under control so far, Anadolu reports.

The forest fires have erupted over the last few days in the southern provinces of Mersin, Osmaniye, Adana, Antalya, Kahramanmaras.

The blazes also burst out in the southwestern province of Mugla and central provinces of Kirikkale and Kayseri.

The county's efforts to bring 10 ongoing fires under control are continuing as 1,832 personnel, three planes, 29 helicopters, and 458 water tenders are joining the mission.

Turkey’s Mediterranean coastal city of Antalya is one of the areas where fires blaze out. An 82-year-old man, who was left alone at home, died while evacuation efforts were underway in the Kepezbeleni village of Akseki district.

Agriculture and Forestry Minister Bekir Pakdemirli said on Thursday that there are 10 people stranded in the Oymapinar Dam in the province while some neighborhoods were evacuated.

"Ambulances and AFAD (the Disaster and Emergency Management Authority) teams are on the way for our citizens in Oymapinar Dam. The road is open, they will try to evacuate them," he said, adding that they do not face a life-threatening situation.

Forest fires first erupted on Wednesday in Antalya’s Manavgat district and spread over a large area.

"Three of our citizens lost their lives and 122 others were affected from fires while treatment of 58 citizens continues," AFAD said on Manavgat fires.

With the latest announcement, the number of people who died during fires in Antalya has risen to four.

Along with Antalya, Adana, and Mersin, firefighters are working selflessly to bring fires under control in other provinces.

In Mersin, people living in areas near fires were evacuated on Wednesday.

Firefighters are battling fires in the two districts of the province.

They are also working in the Kozan district of Adana province where a fire broke out in a forested land in the Kizlarsekisi area.

Authorities said that the powerful wind fanned fires to rage through the region and it hampers efforts to put out the blazes.