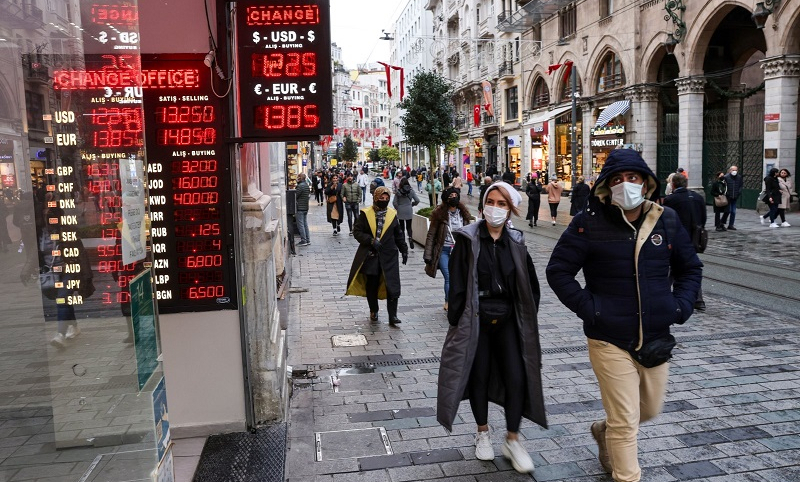 “Since 2013, every time we attempted to implement our low interest rate policy, we were met with strong opposition. This time, we are determined to carry this out,” Nebati said on Twitter.

Amid high volatility, the lira hit a record low of 13.45 against the United States dollar on Tuesday. President Recep Tayyip Erdoğan has defended the Central Bank of the Republic of Turkey's (CBRT) move to slash the benchmark policy rate.

The CBRT lastly cut the one-week repo rate by 100 basis points on Nov. 18 to 15% and signaled more easing would come before the end of the year. It has now slashed rates by 400 basis points since September.

“We need to evaluate Turkey’s economy from a bigger window rather than a narrow perspective only taking the exchange rate as a basis,” Nebati said. “Under the current market conditions, there is no issue with the policy rate being kept lower than inflation.”

The central bank says inflation pressure is temporary though likely to last through mid-2022.

Nebati added that the easing would provide stimulus to the economy to boost employment and exports while tackling the current account deficit. He said revenue earned from the low rates policy would be directed to key imports, such as energy and raw materials.

“The manipulative attacks waged on the Turkish lira over our low interest rate policy will not seriously damage our economy,” he said. “Though there was turbulence in the real sector with the last exchange rate attack, our economy maintains all of its strength,” he added.

Erdoğan this week defended the policy, saying a tight interest rate policy will not lower inflation and vowed Turkey would win what he called an “economic war of independence.”

He blamed the lira’s weakness on games he said were being played on foreign exchange and interest rates.

Erdoğan has been backing the view that lower interest rates are the only way to curb inflation.

Opposition politicians and some economists have criticized and challenged the current policy, calling for its reversal.

“I suggest that all parties reevaluate the wrongness of the ‘high interest, low inflation' policy that has been dictated to us, specifically for our country, which has a structural current account deficit,” he said.