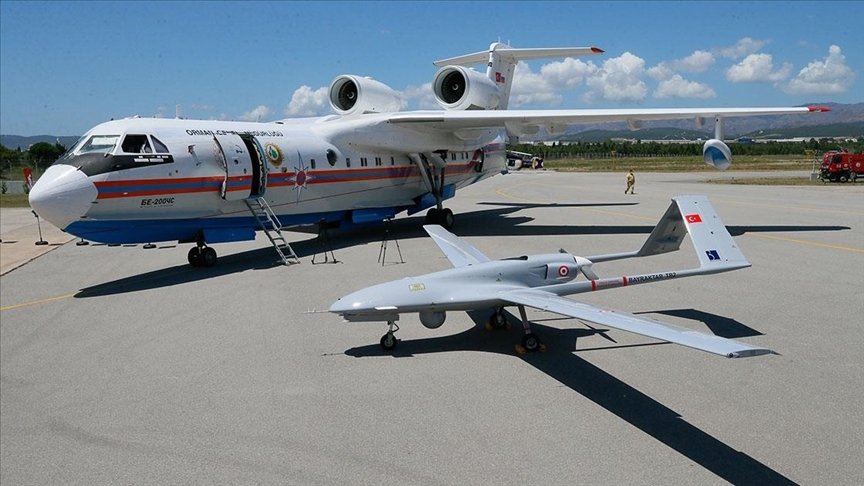 Turkey is mobilizing on all fronts to contain the forest fires that have been ravaging towns across the southern parts of the country. From firefighters to airplanes and helicopters, everyone and everything is working to extinguish fires over the past week. Even locally made unmanned aerial vehicles (UAVs) have been tapped for the fight against the fires, Daily Sabah reported.

Drones are often used in wildfire surveillance and suppression. They help in the detection, containment, and extinguishing of fires. Currently, nine drones are being deployed by the Ministry of Agriculture and Forestry to help to extinguish fires in Manavgat and Marmaris, two towns where major blazes are continuing.

The Bayraktar – with its electronic, software, aerodynamic, design and sub-main systems fully designed and developed nationally – stands out among the world's most advanced UAV systems in its class with its flight automation and performance. It has a record altitude of 27,030 feet for over 24 hours in the air and can carry 150 kilograms (over 330 pounds) of payload. It can operate day and night. It is most widely used by the Turkish Armed Forces, particularly for counter-terrorism operations.

Aksungur, developed by Turkish Aerospace Industries (TAI) is a medium-altitude, long-endurance UAV. It can carry up to 750 kilograms (1,654 pounds) of payload and is capable of long-endurance operations at an altitude of up to 40,000 feet. The UAV most recently broke a record during its 59th test flight by staying in the air for 49 hours.

The country earlier this year in northwestern regions started using a new set of high-technology drones that can create 3D models of disaster sites. Drones are actively used to monitor the forests against sabotage attempts and other potential dangers that may cause forest fires.