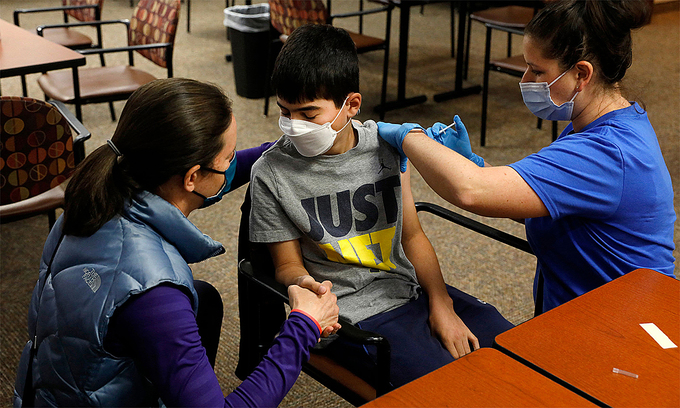 The decision came after a high-level medical panel advising the government this week endorsed the shots, ruling that the known benefits outweighed the risks of side-effects.

"As a mother and a physician, I know that parents, caregivers, school staff, and children have been waiting for today's authorization," said acting Food and Drug Administration chief Janet Woodcock in a statement.

"Vaccinating younger children against Covid-19 will bring us closer to returning to a sense of normalcy."

The vaccine rollout should begin in earnest after the Centers for Disease Control and Prevention convenes a panel on Tuesday to further discuss clinical recommendations.

Pfizer and its partner BioNTech announced this week the US government had bought 50 million more doses as it works to protect children, including eventually those under five.

In a clinical trial involving more than 2,000 participants was found to be more than 90 percent effective at preventing symptomatic disease.

The vaccine's safety was also studied in more than 3,000 children, and no serious side effects have been detected in the ongoing study.

In this age group, the vaccine is given as two shots three weeks apart, dosed at 10 micrograms -- a third what is given to older age groups.

Severe Covid is rarer in children than adults, but far from non-existent.

According to the CDC, there have been 8,300 Covid hospitalizations of children aged five-to-11 since the start of the pandemic, and 146 deaths.

There have also been more than 5,000 pediatric cases of multisystem inflammatory syndrome in children (MIS-C), a rare but highly serious post-viral complication, including 46 deaths.