US scientists find conditions for life on Ceres 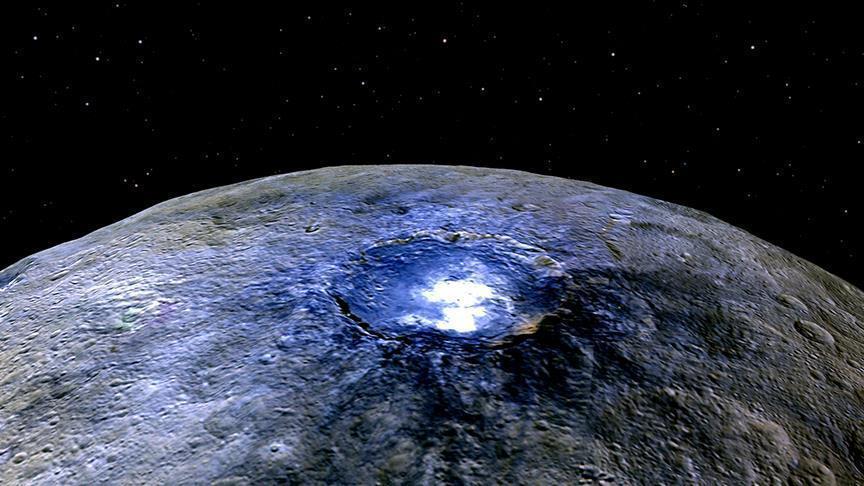 The crucial conditions for life exist on the dwarf planet Ceres, which orbits among the mob of asteroids between Mars and Jupiter, researchers report.

In the study’s results, the international team of astronomers said that the discovery means that primitive life may have formed on Ceres, which is the largest space object in the asteroid belt, according to Anadolu Agency.

This large region populated by asteroids and minor planets ranges between 179.5 and 329 million kilometers (111.5 and 204.43 million miles) away from Earth, depending on where Earth is in its year-long orbit around the sun.

The research was published Friday in the journal Science.

“Ceres has evidence of ammonia-bearing hydrated minerals, water ice, carbonates, salts, and now organic materials,” Simone Marchi, an author of the paper and a senior research scientist at Southwest Research Institute in Texas, said in a statement. “With this new finding Dawn has shown that Ceres contains key ingredients for life.”

These organic compounds, the “key ingredients for life”, were detected by a spectrometer on NASA’s Dawn spacecraft. Dawn launched in 2007 and has been orbiting around Ceres for the past two years.

The study’s authors are not sure how the compounds actually formed on Ceres, though it appears that the molecules likely developed organically on the dwarf planet as opposed to being transplanted via an asteroid collision.

These compounds, which are very similar to molecules found on Earth, would probably not survive the intense heat generated by a crashing asteroid.

The finding now cements Ceres, which formed about 4.5 billion years ago, as the hot new location for scientists searching for extraterrestrial life.