What can the UN do for justice over crimes against Azerbaijan? 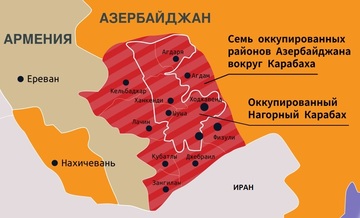 President of Azerbaijan Ilham Aliyev reminded the world of the unresolved Nagorno-Karabakh conflict speaking at the UN General Assembly.

He said that the reason that Armenia still fails to comply with UN Security Council resolutions is the double standards applied by the international community.

"For more than 25 years Armenia occupies 20% of the territory of Azerbaijan, Nagorno-Karabakh and 7 other regions of our country," the head of state said.

He added that Nagorno-Karabakh is an ancient and historical part of Azerbaijan. As a result of Armenian aggression almost 20% of the internationally recognized territory of Azerbaijan is under Armenian occupation. "More than one million of Azerbaijanis became refugees and internally displaced persons," the head of state said.

The President of Azerbaijan again reminded that Armenia committed genocide against Azerbaijanis in Khojaly.

"On February 26, 1992 Armenia committed war crime killing 613 peaceful residents of Khojaly, among them 106 women and 63 children," he said. According to him, one of those war criminals who committed that terrible crime against humanity is current Armenian President.

Ilham Aliyev also said that Azerbaijan is committed to peaceful resolution of the conflict but at the same time will defend its citizens in line with UN charter if Armenian military provocations continue and if necessary will punish once again the aggressor as it was done in April, 2016.

"Armenia-Azerbaijan Nagorno-Karabakh conflict must be resolved on the basis of international law, relevant UN Security Council resolutions. Territorial integrity of Azerbaijan must be completely restored," the president of Azerbaijan said.

Political consultant, candidate of historical science Oleg Kuznetsov said speaking to Vestnik Kavkaza that the world community, including the UN, is capable of forcing Yerevan to fulfill the UN Security Council resolutions. “Any small state existing on the planet is anyway dependent on a bigger power, which is at least its overlord if not a host country. This is a universal law of international relations, therefore, Armenia could have been forced to fulfill the UN Security Council resolutions if there is a will. The only question is who should act in the role of a patron state for Yerevan,” he said.

“Russia was this a country until recently but it did not hurry to force Armenia to fulfill the Security Council resolutions. Now we see Armenia attempting a demarche towards the Euro-Atlantic integration and trying to stress in action that Russia is already not a full-pledged patron of Armenia. Covering the fact that Armenia accounts for the second bigger US embassy of 1,5000 people (yielding just to that in Baghdad), it is possible to say that Russia is the only overlord of Armenia only by appearance, since the United States also holds the real levers of influence on Yerevan. The United States and Russia are currently in confrontation and none of them will make a concession to another in order to force Armenia to fulfill the UN Security Council resolutions,” the expert said.

Commenting on the reminder that Serzh Sargsyan’s involvement in mass murders of Khojaly residents, Oleg Kuznetsov noted that incumbent Armenian president is an international terrorists in terms of law. “Serzh Sargsyan is a head of the Karabakh clan, the military-political junta reigning in Armenia. It is formed of former field commanders of illegal armed formations of Armenian separatists in Nagorno Karabakh. Armenia’s political system in its entirety is now tied to a quasi-state in the occupied lands of Armenia, and Armenia itself is actually a colony of this quasi-state, created by the international terrorists from Karabakh. Armenia itself is occupied by the Karabakh clan,” the political consultant said.

The geography of Nagorno-Karabakh conflict, the international community does not demonstrate the necessary political will for Armenia’s fulfillment of the UN Security Council resolutions. No other means will help to avoid Yerevan’s provocations and killing of people. “The war is underway in Karabakh and deployment of peacekeepers will be of no effect, because they will have to separate the parties at least on the width between the mountain valleys, which is tens of kilometers. I do not think that any country will be ready to use their military to keep the control of almost a 20-km wide and 500-km long strip. No one will control 100,000 square meters, ensuring the infrastructure and bearing responsibility for the lives of local civilians,” he said commenting on possible deployment of peacekeepers.

On his part, head of the Political Studies Institute Sergey Markov said that the ‘Kazan formula’ will help resolve the Karabakh conflict. “Regions around Nagorno Karabakh must be deoccupied in exchange for two corridors and de-blockage and demilitarization of the region. This will be followed by gradual economic, social and humanitarian reintegration of Nagorno Karabakh with Azerbaijan. Karabakh will clearly remain predominantly Armenian after return of the Azerbaijani community to Karabakh and it will be a kind of a condominium. This is a modern peaceful solution of such conflicts,” Markov said.

As for  Ilham Aliyev’s reminder that Armenia is now ruled by a military criminal, the participant of the mass killing of residents in Khojaly, he said this further contributes to weakening positions of Yerevan. “On the one hand, the issue of Khojaly is raised above, attracting more common attention and allows to make wide conclusions, and recognize on a wider platform that a crime really occurred there. On the other hand, the Armenian leadership turns locked in a more radical situation. In general, it would be logical for the Armenian leadership to strive for a peaceful solution by ‘Kazan formula’, but they are afraid of their radical Diasporas,” he concluded.