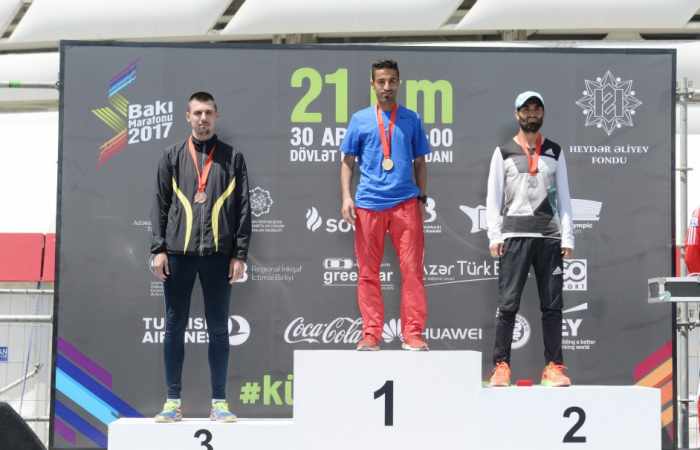 A ceremony to award the winners of the Baku Marathon-2017, initiated by the Heydar Aliyev Foundation has been held.

Baku Marathon–2017 covered a distance of 21 kilometers (half marathon), starting at the Flag Square and finishing at Baku Olympic Stadium. Prominent public and political figures, sportsmen, members of general public and students were among the runners.

The marathon aims to create a new culture in the sport history of Azerbaijan, assist the development of sport, and promote healthy lifestyle among young people.

The funds to be raised by the marathon will be spent to fund the Heydar Aliyev Foundation`s project to help children deprived of parental care.

Awards for Baku Marathon-2017 were granted in two categories. Winners of the first places in both men`s and women`s categories will be awarded 3,000 AZN, whereas the second and third place winners will get 2,000 and 1,000 AZN respectively along with gifts, medals and certificates.

Besides the three major winners among men and women, fourth, fifth and sixth place winners in both categories will get a tourist voucher for two persons to any European country of their choice.

Similar marathons have been held in London, Paris, Boston, New York, Chicago, Berlin, Barcelona, Istanbul and other cities. The distance at the marathon is 42.195 km and half marathon is 21.097 km. Held since 1981, the London Marathon is the Guinness World Record's largest annual fundraising event in the world.