WT: US President should value such a reliable ally as Azerbaijan 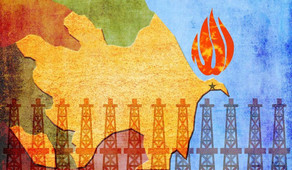 The US President should appreciate the fact that there is such a reliable ally as Azerbaijan, which must be supported.

Report informs that Chairman and CEO of Caspian Group Holdings LLC, publicist Rob Sobhani stated this in his article published in The Washington Times.

Sobhani notes that although the Azerbaijani territories continue to be occupied by Armenian forces (with significant support from Moscow), the President of Azerbaijan is determined to solve this frozen conflict by peaceful means.

"In fact, Mr. Aliyev’s desire to solve the Nagorno-Karabakh conflict peacefully is an opening for the Trump administration to work with Moscow and bring peace to the region that would benefit both Armenia and Azerbaijan", Sobhani writes.

“When President Trump looks outside his office at 1600 Pennsylvania Avenue, he cannot see Azerbaijan, but what he should appreciate and support is the fact that miles away, an American ally exists that deserves America’s praise. President Trump may want to show his appreciation by inviting President Aliyev to the White House, where they can both write a new chapter in America’s relations with one of its most reliable allies in the broader Middle East”, the article says.