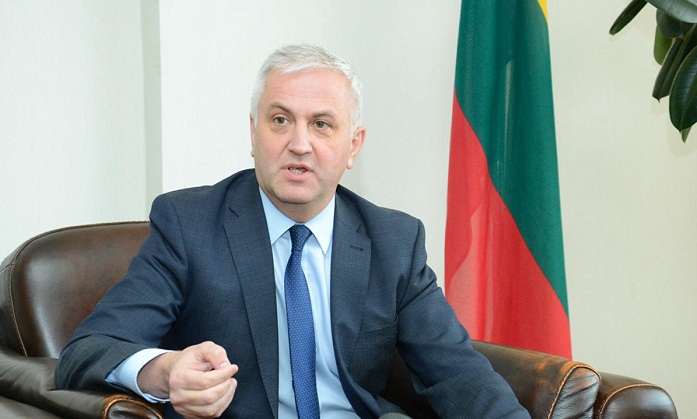 "Lithuania has five free economic zones, which may be interesting for Azerbaijani investors."

The Lithuanian government is ready to introduce certain benefits and guarantees for Azerbaijani investors in order to attract them to economic zones, said Lithuania’s Ambassador to Azerbaijan Valdas Lastauskas in his interview with Trend.

"Today, there are Azerbaijani investments in the tourism sector of Lithuania. This is, firstly, the construction of hotels in the zones of business tourism," noted the diplomat.

"Many Azerbaijani investors are interested in this type of activity, and benefits and guarantees are being considered for them."

Lastauskas said that Lithuania has five free economic zones, which may be interesting for Azerbaijani investors.

The enterprises that will work in these zones are exempt from income tax for six years, and will pay a tax in the amount of 7.5 percent in the next ten years, said the diplomat.

He went on to add that those enterprises don’t pay revenue taxes and real estate taxes.

Via Lithuania one can also enter the European market, and Klaipeda Seaport, railway lines, highways are a good opportunity for this, the ambassador said.

In May 2016, Baku hosted the meeting of representatives of railway agencies of Lithuania, Belarus, Ukraine, Moldova, Romania, Bulgaria, Georgia and operators of the `Viking` train project.

The Azerbaijan Railways CJSC submitted a letter on joining the Viking international railway project. The protocol was signed by all participants of the project. Azerbaijan’s Karvan Logistics was defined operator of the `Viking` train through the country’s territory.

The diplomat noted that Lithuania supports this project and is doing everything possible to make this supply route of goods from the East to the West and from the South to West via the Baltic Sea and further to Scandinavia attractive.

"There are many players in the market," Lastauskas added. "According to the statistics, the freight traffic among Western Europe, the Far East and China tripled from 2005 to 2015. It means that the flow will continue to increase."

"The best conditions for the transportation of these goods should be offered," the ambassador added. "In this regard, the project has good opportunities. The route covers several countries. A number of technical
issues, including those in the field of customs procedures, must be solved."

"There are no obstacles for the development of cooperation in the economic sphere," the diplomat added. "It is possible to improve relations in this field and increase the trade turnover level."

The diplomat said that the trade relations between Azerbaijan and Lithuania expanded and the trade turnover increased from 2011 to 2015.

"The crisis has affected the economic relations between Azerbaijan and Lithuania since 2016 and the trade turnover even slightly decreased," he added. "But the main thing is that all main conditions for work are available. We have a good legal framework that protects investments and
joint projects. The cooperation between regions of the two countries is being more and more developed every year and it is beneficial for both countries."

There are many areas for cooperation, the envoy said, adding that the most important is desire and mutual interest.

"Lithuania is glad that Azerbaijan and the European Union intend to soon start negotiations on a strategic partnership agreement. This will also expand opportunities of Lithuania as an EU member country for further strengthening of cooperation with Azerbaijan," he said.