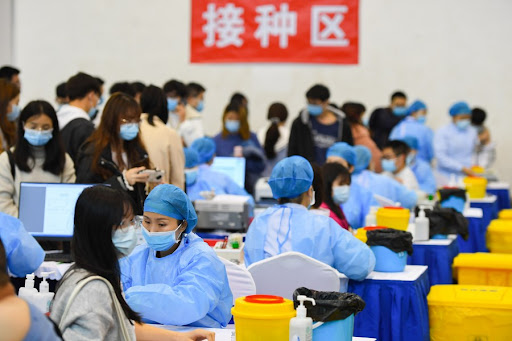 China has fully vaccinated more than 1 billion people against Covid-19 -- over 70% of its total population -- powering ahead of the U.S. and Europe despite having no immediate plans to ease some of the strictest pandemic measures in the world, Bloomberg reports.

A total of 2.16 billion doses have been given in China as of Sept. 15, Mi Feng, a spokesperson at the National Health Commission, told reporters in Beijing on Thursday, fully inoculating more than 1.01 billion people.

The milestone comes nearly 10 months after China give its first conditional approval to the inactivated vaccine from state-owned Sinopharm and kicked off the biggest immunization campaign in history. Another six inoculations developed by domestic drugmakers and academic institutes have since been cleared and rolled out to those aged 12 and older.

The pace of the program puts China in the lead among the world’s biggest economies. Just over half of the population in the U.S. and Japan is fully vaccinated, while the rates in the U.K. and Germany exceed 60%. India lags, with less than 15% of its population fully protected, according to Bloomberg’s Vaccine Tracker.

China accounts for more than a third of the 5.18 billion shots that have been administered globally. Beijing has also exported 800 million doses to the rest of the world. It has signed off on giving booster shots to those at the greatest risk of contracting the virus or developing severe Covid, including people over 60 years old.