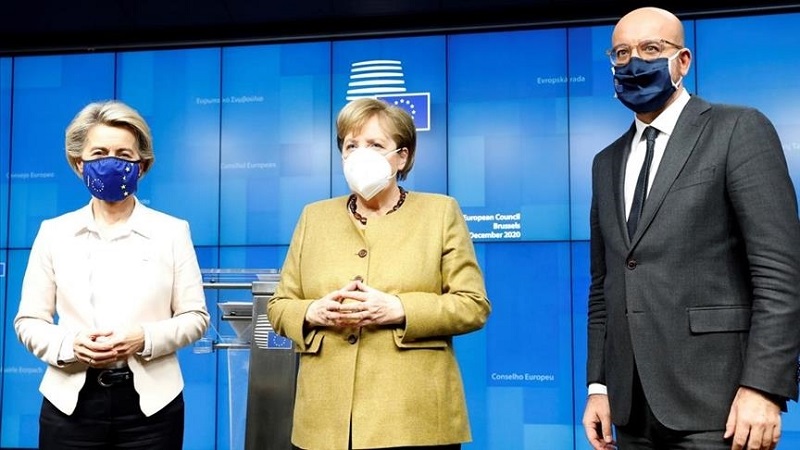 German Chancellor Angela Merkel Friday applauded the EU leaders for reaching agreements on budget and climate change at a two-day summit in Brussels.

"I think we've been a good team to overcome the challenges which went on the agenda," she said in a news conference along with European Council President Charles Michel and European Commission President Ursula von der Leyen at the end of the summit.

Merkel added the next step was to get the agreement approved by national parliaments "so that the financing can be made operational as soon as possible".

Paying tribute to Germany's efforts on reaching the budget deal, Michel said: "it was a big step forward."

"We have the budget, we have this recovery fund as well so that we can face digital transition, the green transition, we can support SMEs and our families as well. Because COVID-19 has been a big shock," he said.

Ursula von der Leyen said the agreement will help the EU member states provide "a strong economic response to the crisis while preserving the rule of law".

"Citizens and the EU economy need our support, more than ever," she stressed.

The EU leaders have agreed on a €1.8 trillion ($2.18 trillion) long-term budget and COVID-19 recovery package after long discussions on the first day of the summit in Brussels.

The agreement marks the end of a months-long stalemate over a clause linking the distribution of funds to rule of law in EU member states, with strong opposition from Hungary and Poland.