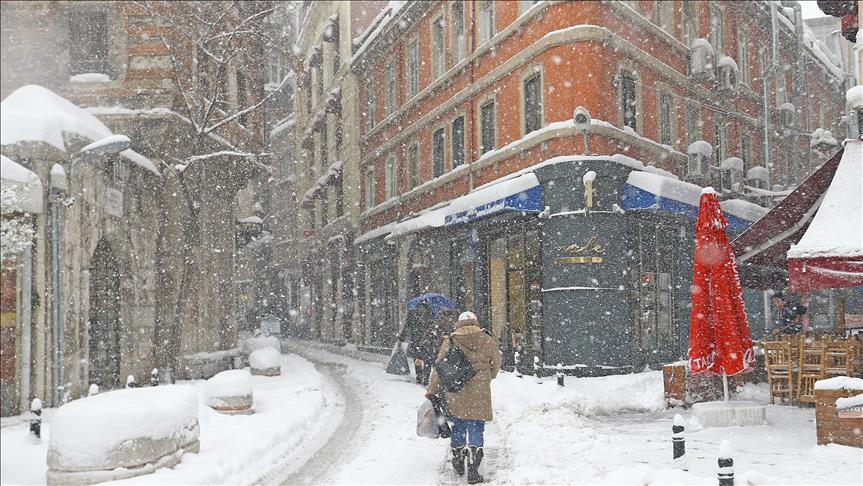 Extreme winter conditions continue to take a toll on daily life in Istanbul Monday, resulting in the cancelation of flights, disruption of transport and shutdown of schools.

As Istanbul governor's office released on its website, due to snowfall, the shifts in public institutions will end at 3.30 p.m (1230GMT) on Monday to reduce traffic volume in the city, according to Anadolu Agency.

The governor's office later announced that schools will also be closed Tuesday due to heavy snow and icing on side streets.

In a post on his official Twitter account, Turkish Airlines CEO Bilal Eksi said Istanbul's Ataturk Airport has been closed for domestic flights until 0.00 a.m. on Tuesday (2100GMT Monday).

Istanbul's Sabiha Gokcen Airport, in Istanbul's Asian part, was also closed due to heavy snowfall, according to airport authorities.

The authorities told Anadolu Agency that the landing fields were covered with snow, adding that the planes had been directed to other airports.

The General Directorate of Coastal Safety said in a written statement that ship traffic in Istanbul's Bosphorus had been halted because of limited visibility.

Istanbul Metropolitan Municipality (IMM) also announced on its website that all domestic ferry services have been suspended until further notice.

Meanwhile, ferry services between Istanbul and northwestern cities of Bursa, Yalova, Balikesir were also stopped until at 12:00 a.m. local time (0900GMT) on Tuesday, the operator IDO announced on its website.

Turkish Airlines said in an earlier statement on its website that 281 domestic and international flights were canceled Monday while private-run Pegasus Airlines canceled 78 flights.

Turkey's General Directorate of Meteorology stated that snowfall, which is still continuing across Istanbul, will increase its effect from noon until night Monday, with snow piling up to reach 122 centimeters in certain areas of the city.

Schools in Istanbul were shut on Monday while some universities postponed their examinations.

Since the beginning of snowfall Friday, the IMM teams have been working with 7,000 personnel in three shifts with 1,347 vehicles, as 834 homeless are being hosted at Zeytinburnu Sports Complex, Topbas said.