How many monuments honor fascists, Nazis and murderers of Jews? You’ll be shocked

The most curious thing about last year’s protests that toppled statues of slavers and colonizers is that the monuments of Holocaust perpetrators didn’t even make headlines.

Yet a Forward investigation reveals there are hundreds of statues and monuments in the United States and around the world to people who abetted or took part in the murder of Jews and others during the Holocaust.

The Nazi collaborators of Central and Eastern Europe weren’t as fastidious at keeping records as their Third Reich allies, which makes it difficult to arrive at a precise number of their victims. As a rough estimate, the Nazi collaborators honored with monuments on U.S. soil represent governments, death squads and paramilitaries that murdered a half million Jews, Poles and Bosnians.

Holocaust perpetrators is the correct term for these men and organizations, for they played an integral part in the Final Solution, arresting and deporting Jews to concentration camps or gunning them down in the forests and fields of Eastern Europe (one-third of all Holocaust victims were killed in what’s called the “Holocaust by bullets”). 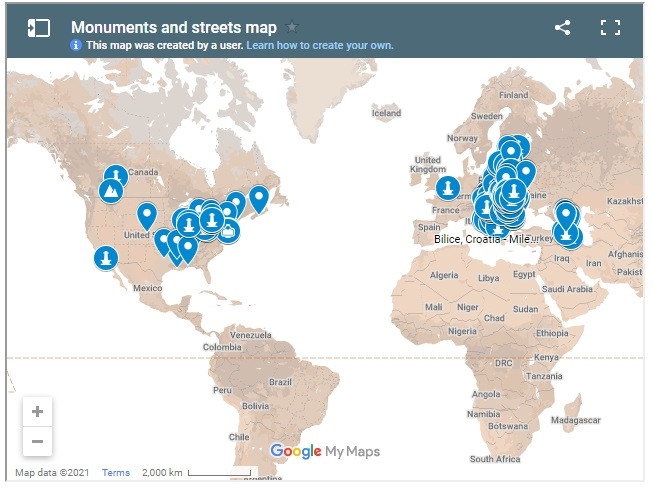 Without collaborators like the ones who occupy pedestals across America, the Holocaust as we know it couldn’t have happened.

On Jan. 27, International Holocaust Remembrance Day, the Forward is publishing the first-ever database of monuments to Nazi collaborators and Holocaust perpetrators. It lists 320 monuments and street names in 16 countries on three continents which represent men and organizations who’ve enabled — and often quite literally implemented — the Final Solution.

In downtown Manhattan, along Broadway’s “Canyon of Heroes,” are memorial plaques to Henri Philippe Pétain and Pierre Laval, the head and prime minister of France’s collaborationist Vichy government which hunted down and deported 67,000 Jews to the concentration camps. In addition to his Broadway plaque, Pétain is honored with 11 streets in the U.S. France has gotten rid of its Pétain streets, but the ones in America remain.

Pétain, at least, was a World War I hero before turning traitor. Here’s a sampling of other dubious honorees in the U.S.:

The situation in America pales in comparison to other nations.

Even more worrying than the sheer number is the overall trend. The vast majority of these statues were erected in the past 20 years. Recent studies point to the staggering spread of Holocaust ignorance: two-thirds of U.S. millennials don’t know what Auschwitz is, while a third of Europeans know little to nothing about the Holocaust. The growth of statues to perpetrators, however, evinces a far deeper problem. The Holocaust isn’t just being forgotten, it’s being perverted via historical revisionism that is turning butchers into heroes.

The biggest reason to pay attention to this disturbing pattern is that these monuments signal not only an attack on Holocaust memory but the presence of organized white supremacy that is focused on far more than history.

In 2017, America was shocked to see neo-Nazis with torches march in the defense of Robert E. Lee’s statue in Charlottesville. But the marchers didn’t chant about Robert E. Lee — they chanted “Jews will not replace us,” a chief tenet of the white genocide theory that motivated the Pittsburgh synagogue and El Paso terrorist attacks. The white supremacists rallied around a 19th century general, but their minds and actions were focused on the present, with deadly results.

The same is happening across the Atlantic, only to a greater degree. Wherever you see statues of Nazi collaborators, you’ll also find thousands of torch-carrying men, rallying, organizing, drawing inspiration for action by celebrating collaborators of the past.

You’ll see it in Viktor Orban’s Hungary, where far-right figures use elaborate ceremonies anchored to WWII anniversaries to draw neo-Nazis across Europe; Ukraine, where the rehabilitators of Bandera work to turn the country into a hub of transnational white supremacy; Croatia, where men carrying WWII fascist symbols marched in support of Donald Trump; and France, where the far-right Marine LePen rallies supporters by insisting that France has no responsibility for the Holocaust. You’ll see it in a dozen other nations as well.

The monuments and the figures they honor stand at a crossroads of fascism and neo-fascism, the losers of WWII and today’s white supremacists who believe they’re on the brink of a global race war. It’s impossible to understand one without understanding the other, which is why tracking the growth of Nazi collaborator monuments is so crucial. These statues don’t just disparage the dead; they warn the living.

The Forward, an American news media organization for a Jewish-American audience