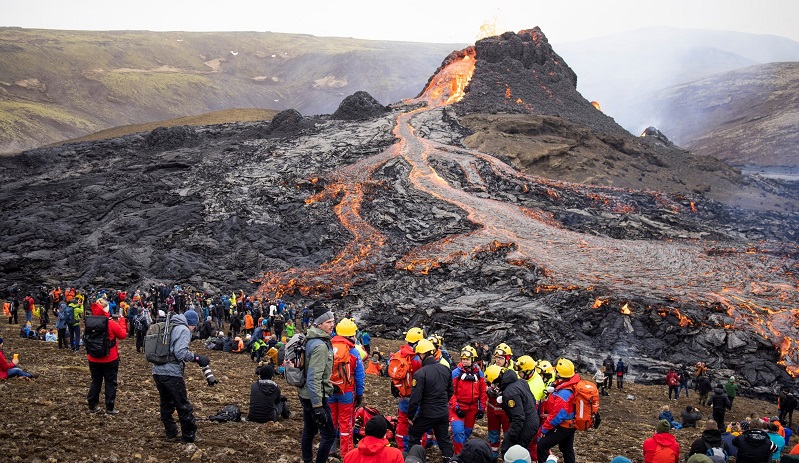 Thousands of curious onlookers have flocked to an erupting volcano in Iceland to marvel at the hypnotic display of glowing red lava, the bravest of them grilling hot dogs and marshmallows over the smoldering embers.

The eruption of a fissure near Mount Fagradalsfjall, which began late Friday, was the first in the same volcanic system in about 900 years.

The volcano is located only about 40 kilometers (25 miles) from the capital Reykjavik and can be reached after a 90-minute hike from the nearest road.

"It smells pretty bad. For me what was surprising was the colours of the orange: much, much deeper than what one would expect," he tells Agence France-Presse (AFP).

The incandescent lava bubbles and spurts from a small cone in the Geldingadalur valley, piling up in the basin and slowly turning a thick black as it cools.

Some 300,000 cubic meters (10.5 million cubic feet) of lava have poured out of the ground so far, according to experts, although the eruption is considered relatively small and controlled.

Access to the site was blocked in the first hours after the eruption. Authorities then lifted the roadblocks but discouraged visits, but by Saturday afternoon visitors were allowed – under strict guidelines.

"We are just here to look after the people and see that everything is okay. And just watch that the people are not going too close to the lava and asking them step back," explains Atli Gunnarsson, a 45-year-old police officer, donning a yellow hardhat with a gas mask in hand.

Rescue teams also had to help dozens of freezing and exhausted people find their way back to the road on Sunday in the dark as weather conditions deteriorated.

A small recurring beep can be heard around the emergency crews. They're carrying devices that measure gas pollution, especially sulfur dioxide, which can pose a danger to health and even be fatal.