Analyst on scuffles in the Armenian parliament: First of all it means that the state life in the country is turning to the dead end 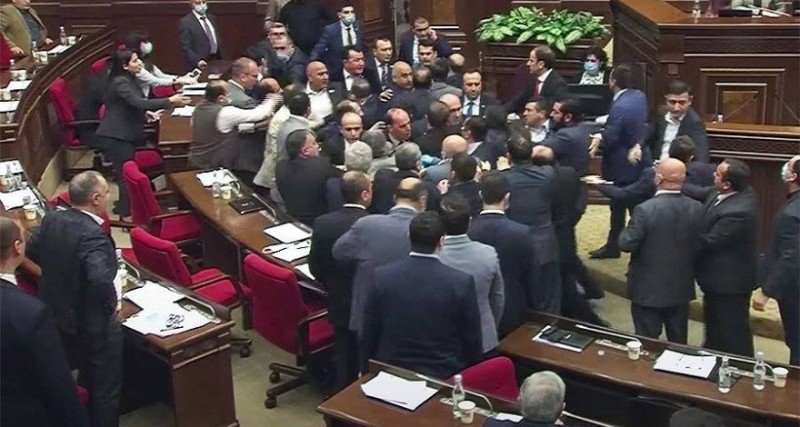 For a few days now, we have been witnessing the strategy of the nationalist opposition in the Armenian parliament. Kocharyan and Sargsyan blocs have only 1/3 of the seats in the National Assembly and cannot in any way influence the adoption of the bills in terms of voting. But 36 people are enough to influence the activity of the legislative body in another way - through scandals.

Andrey Petrov, senior analyst of Vestnik Kavkaza commented on the brawls and scuffles with the participation of MPs in the Armenian legislative body in a conversation with News.Az.

He said that every brawl that takes place in the parliament, along with the break, lasts about an hour of working time, which means that by provoking the scuffles, the opposition can hamper and even block the work of the National Assembly on almost any scale. The voices of "Armenia" and "I have honor" mean nothing, but their fists do matter, and it is with their fists (feet, bottles, whatever) that they will "work."

"It is noteworthy that the "Civil Contract" opposition party even makes a play, and finds such tactics convenient for the authorities - it is not without reason that "CC" deputies actively provoke the opposition and obstruct their speeches. It is not quite clear whether this is a way to prepare the ground for removing the minority from parliament or whether the ruling regime and its opponents have some common interests which can only be achieved by stopping the parliamentary activity, but it is obvious: instead of unblocking the Armenian borders, deputies from the winning party and the losing blocs have begun to blockade the National Assembly. Now, this is a place for a daily showdown between politicians, almost by the rules of MMA, rather than the main state body of the republic."

According to the analyst, this means, first of all, that state life in Armenia is turning into a dead end.