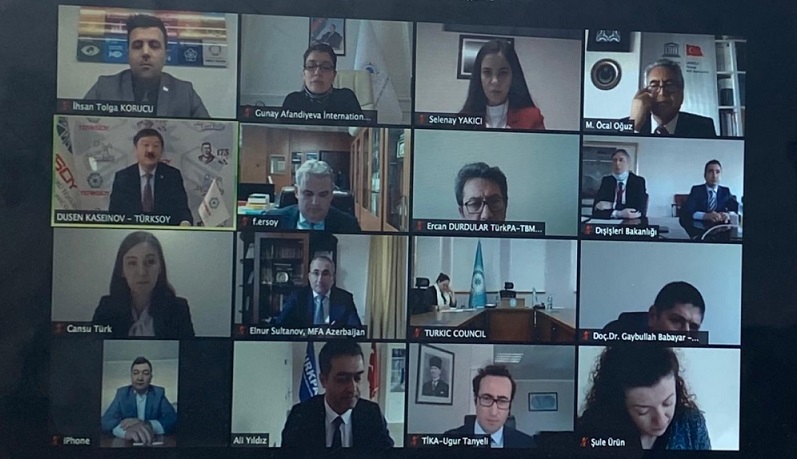 The event was attended by heads and representatives of Turkic Cooperation Organizations, such as the Turkic Council, TURKPA, TURKSOY, Turkic Academy, as well as the national commissions of Azerbaijan, Turkey, Kazakhstan, Kyrgyzstan, Uzbekistan, and Turkmenistan for UNESCO, scientists, and officials.

Taking into consideration the expansion of cooperation between the Turkic-speaking countries, the preservation of linguistic and cultural diversity, the participants of the meeting discussed the issues regarding to the introduction of a draft resolution to UNESCO on the proclamation of the International Turkic Language Day.

Opening the meeting, the Head of the Turkish National Commission for UNESCO Ocal Oguz noted that the rich Turkic language presented great works to the world's cultural heritage and emphasized the importance of its dissemination among wider civilizations. He also spoke about the necessity of holding events jointly with the National Commissions of the Turkic countries for UNESCO and Turkic Cooperation Organizations regarding the proclamation of the “International Turkic Language Day” by UNESCO.

Addressing the event, President of the International Turkic Culture and Heritage Foundation Gunay Afandiyeva noted that the announcement of the Turkic Language Day will give an even greater impetus to the promotion of the centuries-old history and culture of the Turkic-speaking peoples in the international arena. Afandiyeva also emphasized that the Turkic peoples with a unique cultural history have created significant works both literally and in writing.

“The Turkic language has an ancient history and roots. The most important function of language is not only reflection of the human world, but also the preservation of culture as a whole and its transmission from generation to generation. That is why language plays an important role in the formation of personality, people, nation and national character. The Turkic language has deep roots and vast geography.”

Afandiyeva noted that the alphabet has a special meaning in the life of every nation, as well as in the formation of its written culture. “The transition to the Latin alphabet under the leadership of the great son of Azerbaijan and the Turkic world Heydar Aliyev, as well as the decisions taken by Kazakhstan and other Turkic - speaking countries on the use of Latin graphics, contribute to the strengthening of relations between the Turkic countries,” Afandiyeva said.

She also emphasized that the announcement by the President of Turkey Recep Tayyip Erdogan of 2021 as the "Year of Yunus Emre and the Turkic Language” is a remarkable event for the entire Turkic world as a whole.

Speaking about the activities of the international organization she heads, the President of the Foundation noted that one of the main priorities of the organization's activities are events, projects and programs to study and promote the rich heritage of the Turkic world.

In conclusion, Afandiyeva stressed that the International Turkic Culture and Heritage Foundation will support initiatives of preserve the cultural heritage of the Turkic world both within the framework of UNESCO projects and on a global scale.

The participants exchanged views on the announcement of the International Turkic Language Day and made various proposals on their experience.