Italy: Premier urges parliament to help save his gov't 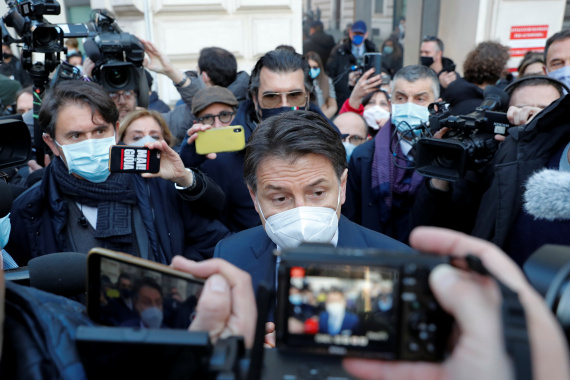 Italian Prime Minister Giuseppe Conte defended his handling of the pandemic and economic crisis and called for the support of new political forces on Monday, as he addressed the lower house ahead of two confidence votes that will decide his government’s survival.

After former Prime Minister Matteo Renzi pulled out his centrist Italia Viva party from the ruling coalition -- in protest against Conte’s policies and “centralizing” methods -- the Italian government was stripped off its already fragile parliamentary majority.

Conte on Monday hit back at Renzi’s move in his speech -- which was followed by an open debate and a confidence vote expected for Monday evening.

The prime minister slammed the door on a possible new alliance with Italia Viva while appealing to other “willing” lawmakers -- with solid pro-European, democratic, and liberal roots -- to help him continue governing at “epoch-making” times, as Italy struggles to exit the COVID-19 health crisis and a dramatic recession.

Conte stressed that he could not understand a political crisis that he dubbed “baseless” and damaging for Italy and its citizens.

“At this point, we can’t cancel what happened. Now we’re turning the page,” he told lawmakers.

However, after the defections of a few possible allies over the weekend -- including the centrist group Udc -- Conte’s task to build up a new majority in the parliament appears increasingly challenging.

His government is expected to easily win the confidence vote in the Chamber of Deputies, where it enjoys a wider majority. But it will scramble on Tuesday in the Senate, where Conte risks not reaching an absolute majority, making his weakened leadership even less stable.

Conte will likely obtain only a simple majority in the upper house, surviving the confidence vote. But he would emerge from the parliamentary battle with an extremely shaky coalition that would risk collapsing at any divisive vote in the coming months.

In the worst-case scenario, a possible defeat in parliament would leave him with no other choice than stepping down.

In that case, the ball would be in the court of President Sergio Mattarella, who would have the task of consulting parties to find another political solution, possibly a “transition” government led by another political leader or a government of “national unity” headed by a technocrat.

The extreme choice for the president would be dissolving chambers and calling early elections, a very complex option in the middle of a pandemic, which would likely see a sound win of the center-right, nationalist and Eurosceptic bloc.