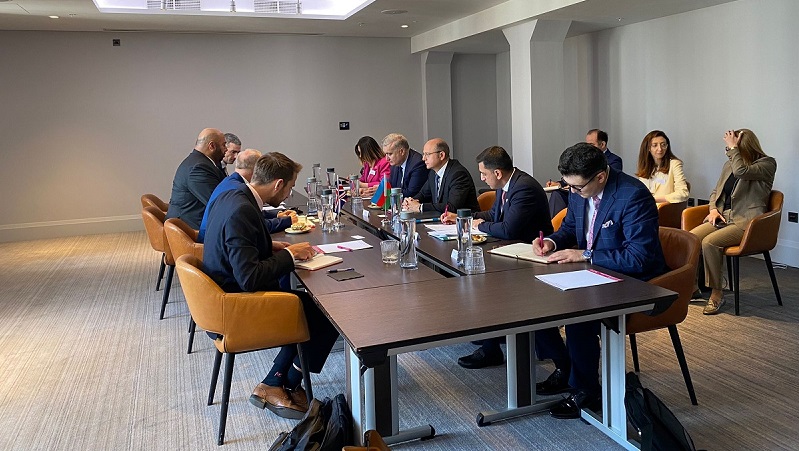 Bilateral meetings were also held between Energy Minister Parviz Shahbazov and Greg Hands, UK Minister of State (Minister for Energy, Clean Growth and Climate Change) and Mike Freer, Minister for Exports. At the meetings, discussions were held on the current status and development prospects of relations between the two countries.

After the meetings, Azerbaijani Energy Minister Parviz Shahbazov and the UK Minister for Exports Mike Freer addressed the meeting of the Intergovernmental Commission attended by delegations of both countries.

Mike Freer said: "It’s great to mark the 30th anniversary year of our diplomatic relations with these important trade talks between our two nations. With our trade worth already over £1 billion, this JIC is a chance to widen and deepen our ties. UK companies are working with Azerbaijan as they transition to renewable energy, invest in new technology, healthcare and education, and we look forward to finding many more opportunities to work together in the years ahead.”

In his speech, Parviz Shahbazov noted that the high political dialogue between the two countries that marked the 30th anniversary of diplomatic relations complemented the exemplary strong economic partnership in the South Caucasus. It was noted in the recent letters of the President of the Republic of Azerbaijan Ilham Aliyev and Boris Johnson, the Prime Minister of the United Kingdom of Great Britain and Northern Ireland that great importance is attached to these relations of strategic partnership. It was noted that the UK is our partner who plays an important role in the economic independence of our country with its investments and support for the development of the energy sector from the very beginning. The UK is the largest foreign investor in Azerbaijan with an investment of over 32 billion USD. Last year the trade turnover between the two countries increased by 47% and was about 668 million USD. In the speech, about 29 billion USD investment in the country's oil and gas sector by bp so far, energy security projects such as the Southern Gas Corridor were appreciated as an indicator of successful energy cooperation.

At the meeting, the work done after the 4th Meeting of the Intergovernmental Commission was reviewed. Discussions were held and mutual presentations were made on cooperation in the fields of energy transition, further improving the business environment and increasing investments, combating the mine threat, digital economy, infrastructure, health, education and agriculture. Detailed information was provided about the new investment opportunities, and the importance of the launch of the Azerbaijani-British Chamber of Commerce was noted. The necessity of accelerating the processes related to the Partnership and Cooperation Agreement between the Republic of Azerbaijan and the United Kingdom of Great Britain and Northern Ireland for the development of bilateral economic relations was emphasized.

A Memorandum of Understanding on cooperation was signed between IDRAK Technological Transfer and ApplianSys of the United Kingdom.

The Protocol on the outcomes of the fifth session was signed. An agreement was reached to hold the 6th meeting of the Intergovernmental Commission in Baku in 2023.