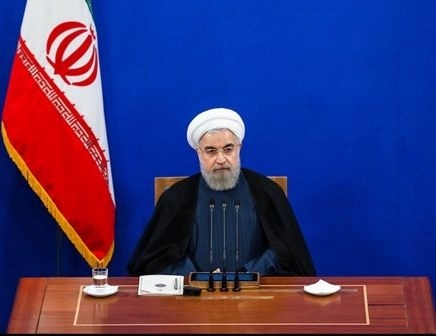 President Hassan Rouhani highlighted the enormous economic and political gains made from the resolution of the lingering dispute over Iran's nuclear program.

Rouhani made the remarks in a press conference attended by some 200 Iranian and foreign reporters in Tehran on Tuesday, APA reports citing Press TV.

Rouhani noted that those who claimed that Iran sought to develop nuclear and other weapons of mass destruction were speaking unjustly and unjustifiably and they should be ashamed of themselves now. Describing the JCPOA as "a great national achievement," Rouhani said, "The closure of this dossier amounted to a moral victory for the great Iranian nation." Rouhani stressed that all nuclear-related sanctions against the Islamic Republic have been removed after implementation of the JCPOA started, adding that there are no more bans in the gas, oil and transport sectors.

Pointing to the economic dividends of JCPOA, the president said the settlement ended nuclear-related sanctions and dramatically increased oil revenues as the mainstay of public finances.

Rouhani stressed that the nuclear deal helped increase oil exports, providing a vital boost to public funds to balance budgets for various sectors from health and education to defense and security.

In response to a question about a possible move by US President-elect Donald Trump to demand fresh negotiations on the JCPOA, the Iranian president said no new talks would be held in this regard. “The JCPOA is not a mutual agreement but is a multilateral agreement. Therefore, it will be meaningless if we wanted to negotiate on the JCPOA anew. There will be no new negotiations,” Rouhani said. Iran's president further stated that Trump has made an assortment of comments about the JCPOA so far, which are mere slogans, and it seems quite unlikely that he would take any practical steps in this regard.

Rouhani refuted the reports that Guardian Council didn’t approve the president to run for a second term, calling them speculations.

Referring to the forthcoming talks on Syria in Kazakhstan’s capital city of Astana, the Iranian president said Astana talks will be based on Syria-Syria dialogue. “Iran wants the ceasefire to continue, that the negotiations continue, that the war against Daesh (the Islamic State group) and the al-Nusra Front continues so that Syria achieves stability and peace so that it can hold a real election,” said Rouhani.

Elaborating on the existing tensions in relations between Iran and Saudi Arabia, Rouhani said the foreign policy of the Islamic Republic has been founded on forging close ties with neighboring countries, including the littoral Arab states of the Persian Gulf.

He said Iran is not seeking to eliminate Saudi Arabia from regional politics and will offer its help to Riyadh if "it takes the right decision" and ends its military intervention in Yemen and stops what he called its meddling in Bahraini affairs.