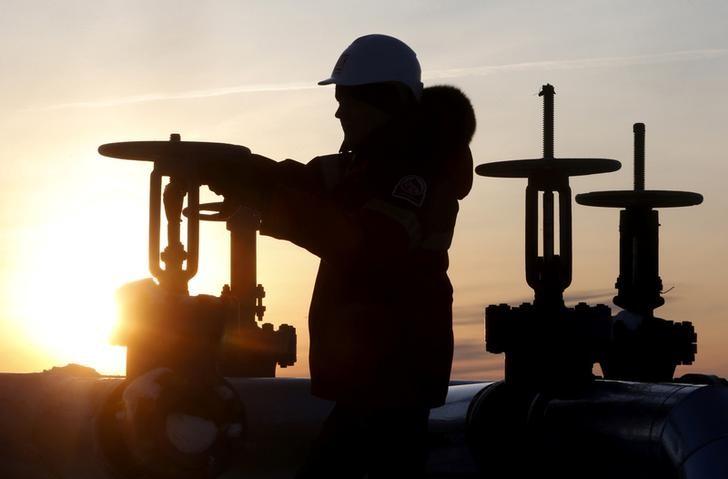 Oil prices were steady on Monday, supported by a weaker dollar, although doubts that OPEC and other producers would fully implement announced crude output cuts held the market back.

U.S. West Texas Intermediate (WTI) crude futures were at $52.32 a barrel, also within 0.1 percent of their last settlement.

Traders said that oil received some support from a weaker dollar, which makes fuel purchases cheaper for countries that use other currencies domestically, potentially spurring demand.

After spending much of the second half of 2016 in an upward trend, the dollar has fallen around 2.5 percent against a basket of other leading currencies .DXY since its early-January peak.

The greenback is in particular focus this week as Donald Trump is set to take office as the next U.S. president on Friday.

"Oil pricing will be driven this week by the movement of the U.S. dollar rather than crude itself, with President-elect Trump's inauguration ... being the main event," said Jeffrey Halley of OANDA brokerage in Singapore.

But traders said that doubts over full implementation of an announced crude output cut from major producers including the Organization of the Petroleum Exporting Countries (OPEC) and Russia were holding back oil prices.

OPEC has said it would reduce its output by 1.2 million barrels per day (bpd) to 32.5 million bpd from Jan. 1, and Russia as well as other non-OPEC members are planning to cut about half as much again.

However, Russian oil and gas condensate production averaged 11.1 million bpd from Jan. 1-15, two energy industry sources said on Monday, down just 100,000 bpd from December. Russia has committed to a 300,000 bpd cut during the first half of 2017 as a part of a global deal with OPEC.

Goldman Sachs said it expected year-on-year U.S. oil production to rise by 235,000 bpd in 2017, taking into account wells that have been drilled and are likely to start producing in the first half of the year.

Overall U.S. oil output stands at 8.95 million bpd, up from less than 8.5 million bpd in June last year and back at similar levels to 2014, when OPEC decided to start a price war against U.S. shale producers and sent the market into a tailspin.