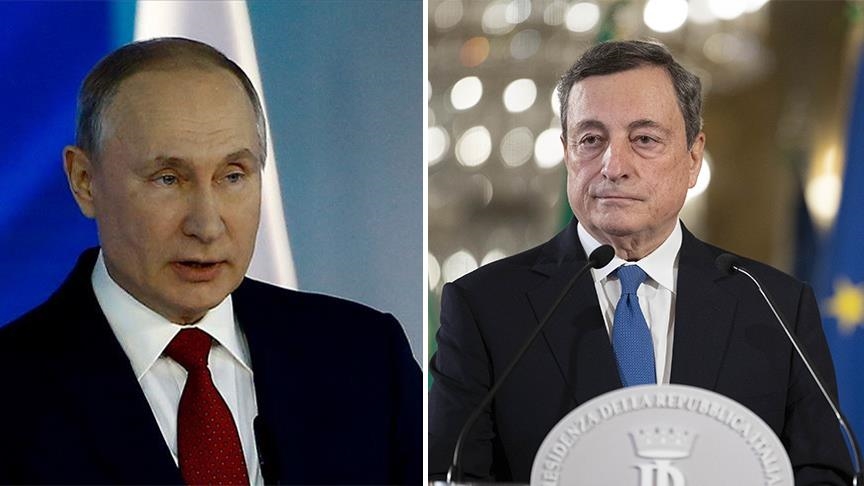 Russian President Vladimir Putin and Italian Prime Minister Mario Draghi held a telephone call on Thursday and discussed the situation in Ukraine and the issue of global food security, according to readouts of the call from both the governments, News.az reports citing UNIAN.

The Italian readout released following the call said the discussion between the two leaders focused on the situation in Ukraine and “efforts to find a shared solution to the ongoing food crisis and its serious repercussions on the poorest countries in the world.”

The Kremlin in its readout said that Putin emphasized that Moscow is ready to make a “significant contribution” to avoid the food crisis through the export of grain and fertilizers, if the West lifts “politically motivated restrictions” on Russia.

“Noting the groundlessness of accusations with the supply of agricultural products to world markets, Vladimir Putin drew attention to the fact that the difficulties that have arisen are related, among other things, to disruptions in the operation of production and logistics chains, as well as the financial policy of Western countries during the coronavirus pandemic. The situation was aggravated due to anti-Russian restrictions imposed by the United States and the European Union,” the Kremlin statement said.

Putin also informed Draghi about the “ongoing work to establish a peaceful life in the liberated cities of Donbas,” the Kremlin said, adding the Russian leader also gave “fundamental assessments of the negotiation process frozen by Kyiv."

“When discussing energy security issues, the intention of the Russian side to continue to ensure uninterrupted supplies of natural gas to Italy at prices fixed in contracts was confirmed,” it said.