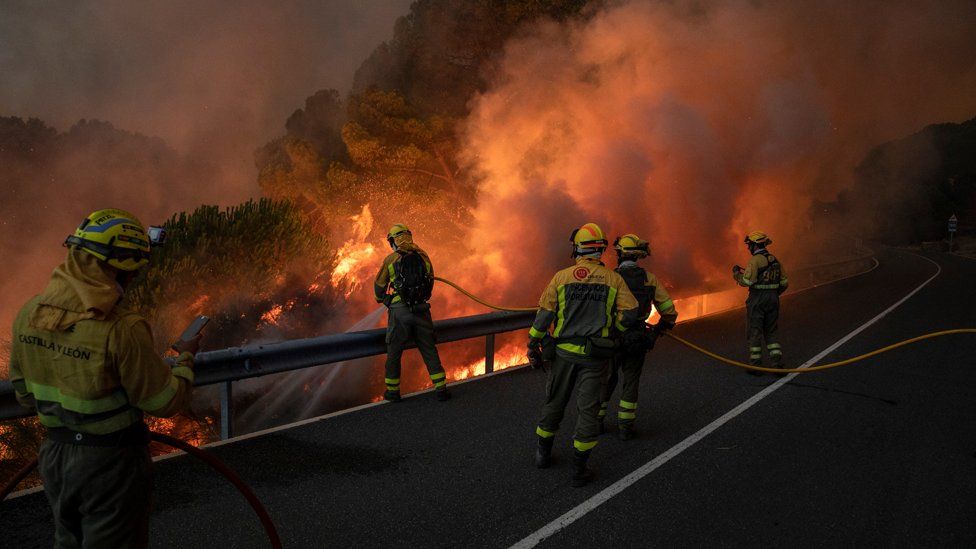 Wildfires are raging across Europe, where a heatwave has intensified drought conditions, News.az reports citing BBC.

Though temperatures have cooled in France and the UK, firefighters are still tackling blazes in Greece, Spain and Italy.

The fires in France's badly hit south-west have started to be brought under control.

And as the heatwave moves north-east, low water levels are hampering transport on rivers in Germany.

Heatwaves have become more frequent, more intense, and last longer because of human-induced climate change. The world has already warmed by about 1.1C since the industrial era began and temperatures will keep rising unless governments around the world make steep cuts to emissions.

More than 1,000 deaths have been linked to the extremely high temperatures in Portugal while in Spain it is at least 500.

In Greece, firefighters were tackling a blaze on Mount Penteli, to the north-east of the capital Athens.

In the nearby town of Pallini, state electricity workers were scrambling to remove burnt pylons, the BBC's Kostas Koukoumakas reports.

Mr Panagopoulos, who was for many years an amateur actor, said his house could be rebuilt but his collection of more than 1,200 theatre books had been turned to ashes.

Firefighting helicopters were dropping water, one after the other. Winds in excess of 80km/h (49mph) have made it harder to contain the fire.

Almost all the water carriers in the region have been deployed. Greece's fire service said additional support was expected from other regions.

Hundreds of people have been evacuated from surrounding areas, including eastern Gerakas, which is home to nearly 30,000 people. A paediatric hospital and the National Observatory of Athens have also been vacated.