2 die, 24 injured on 3rd day of wildfires in southern France 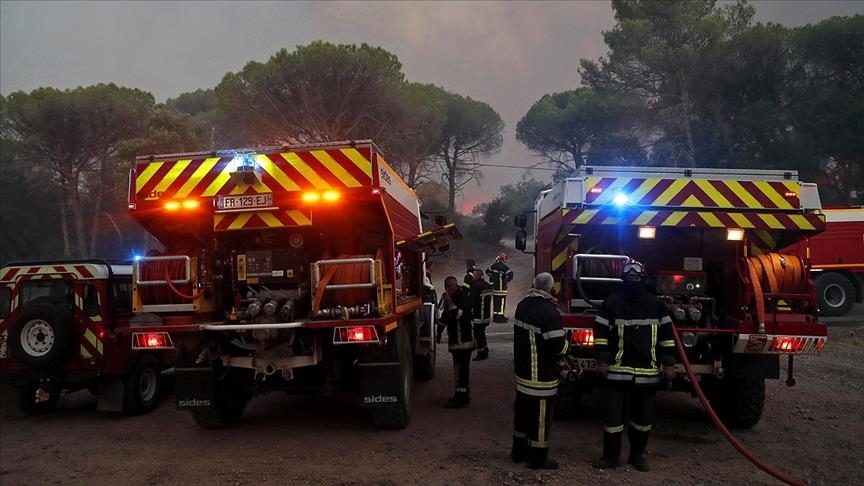 At least two people have died and 24 injured on the third day of the wildfires that broke out in southern France, the prefect of the Var department informed on Wednesday, Anadolu Agency reported.

Evence Richard, at a news conference on Wednesday said two charred bodies, one of which is identified as male, were found in a burnt house. Another 24 people were lightly injured, including 19 civilians and five firefighters.

The fire was suspected to have started by some miscreants in the Maures massif around the town of Gonfaron on Monday evening, and it has yet to be brought under control.

Richard said the problem is not resources or capacity, but unfavorable weather conditions, which made it extremely difficult to control the active fire. Var is experiencing high temperatures of 32-35 degrees Celsius, with a strong easterly wind fanning thick plumes of smoke and reducing visibility.

Several A57 and A8 motorway junctions have been closed to traffic. Tourists and locals are advised to avoid commuting unless there are compelling reasons to do so.

Var, located in the scenic Provence-Alpes-Cote d'Azur region of southeastern France, is a popular destination for both jet-setters and budget campers.

An estimated 10,000 people have been evacuated and rescued since Monday. They were taken to the 14 reception centers set up in the municipalities of Bormes-les-Mimosas, Cavalaire, Cogolin, La Croix-Valmer, Grimaud, Le Lavandou, and Sainte-Maxime. Eight campsites have been closed as a preventive measure and tourists have been warned to not return to these sites.

At least 1,100 firefighters and 45 gendarmeries are engaged alongside aerial reinforcements of water jet bombers, helicopters to bring the raging fires under control. Assessment reports from Var firefighters have said that over 6,300 hectares of land have been burned.