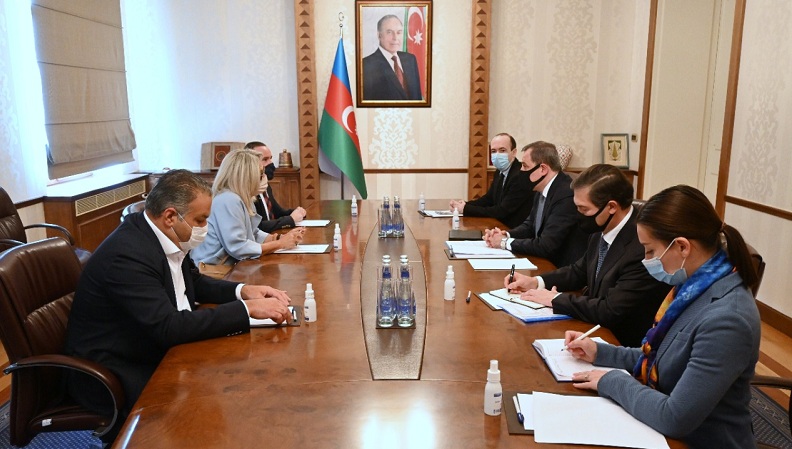 On September 22, 2020, Minister Jeyhun Bayramov received the Ambassador of Portugal to Azerbaijan Paula Leal da Silva upon the termination of her diplomatic tenure.

The Honorary Consul of Portugal to Azerbaijan Murad Rahimov also took part at the meeting.

Minister Jeyhun Bayramov highly appreciated the activities of the Portuguese Ambassador, which contributed to the development of relations between the two countries. The Minister noted that there are opportunities to expand relations between Azerbaijan and Portugal in bilateral and multilateral frameworks. The importance of continuing the practice of conducting political consultations between the Ministries of Foreign Affairs was stressed.

Ambassador Paula Leal da Silva congratulated Jeyhun Bayramov on his appointment as the Minister of Foreign Affairs on behalf of her Government. Ambassador noted that she had spared no effort in further developing the relations during her tenure in Azerbaijan. She expressed gratitude for the assistance extended to her to fulfill her diplomatic mission.

Minister Jeyhun Bayramov briefed the Portuguese Ambassador on the protracted Armenia-Azerbaijan Nagorno Karabakh conflict and its grave consequences, as well as tensions observed in the region. It was noted that the provocative and subversive activities of the Armenian government undermined the settlement of the conflict via negotiations. It was stressed that the international community needs to show a resolute position on this issue and send unequivocal messages to the aggressor state Armenia.

Ambassador Paula Leal da Silva noted that the position of her country is known and Portugal fully supports the territorial integrity of Azerbaijan.

The parties also discussed the global health crisis and stressed the importance of international solidarity and cooperation in this regard.
Stressing on the proposal of the President of the Republic of Azerbaijan to hold a special session of the UN General Assembly at the level of heads of state and government via video conference to combat the COVID-19 pandemic, the Portuguese Ambassador noted that the initiative is fully supported by her government.

The sides also exchanged views on the other issues of mutual interest.