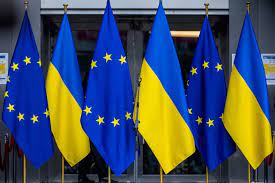 She said the discussions "will feed into our assessment" of Ukraine's readiness to be considered a candidate country to begin lengthy negotiations, including needed reforms.

She told reporters that the assesment by her commission will be presented "soon", the AFP news agency reports.

EU commissioners and officials are expected to look at Ukraine's bid next week, ahead of a summit on 23-24 June that will likely take up the matter.

Von der Leyen's trip to Kyiv was her second since Russia's invasion, her last one on 8 April was to hand Zelensky a questionnaire his officials needed to fill out to provide details that would help inform the European Commission's opinion it has to give to the European Council, representing the EU's 27 member states.

On that visit, von der Leyen said "Ukraine belongs to the European family", however, some EU countries have expressed wariness about giving Ukraine a speeded-up candidacy process.